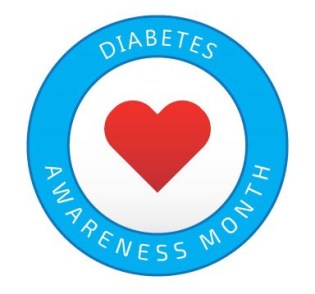 On this month and day, diabetics often feel a sense of inclusion that is otherwise unknown.

“In my life, every month is diabetes awareness month,” said senior Camille Rosenthal, a type 1 diabetic. “But the national recognition gives me hope for more attention toward the diabetic community, which can hopefully lead to better treatments and cures. I use this month as an opportunity to educate my peers and remind myself there’s an entire community of people dealing with the same issues I am.”

Most people are aware of breast cancer awareness month and we all know when to wear pink, but sadly, that isn’t the same story for diabetes.

Diabetes is an often unknown or misunderstood disease. A common unknown fact about diabetes is that there are two different types, type one and type two.

“I don’t think people realize how diabetes can really affect everyday aspects of life,” said Rosenthal. “Common colds last for weeks and turn into something bigger, wounds don’t heal, putting on or losing weight can be near impossible, and the list goes on.”

Diabetes is an autoimmune disease where the beta cells in the pancreas stop producing a necessary hormone called insulin. The human body needs insulin to survive.

“Insulin regulates how the body uses and stores glucose and fat. Many cells in the body rely on insulin to take glucose from the blood for energy,” reported diabetes.co.uk.

Type two diabetes is when the body doesn’t produce enough insulin to thrive. Luckily, for those suffering with type two diabetes, there is a cure. With a healthy diet, healthy eating habits and a good exercise regimen, your pancreas can start producing the necessary amount of insulin.

“Low blood sugar is the most inexplicable awful feeling I’ve come across in my lifetime,” said Rosenthal.

At this time, there is no cure for type one diabetes. According to the Center for Disease Control (CDC), “approximately 1.25 million people suffer from type one diabetes in the United States alone. One in four diabetics have to rationalize their insulin due to the high cost.”

So during the month of November and on November 14th, diabetics worldwide aim to raise awareness by posting their diagnosis stories on social media. Diabetics and non-diabetics alike also wear blue on this day to raise awareness, and to show diabetics that their silent fight has not gone unnoticed.