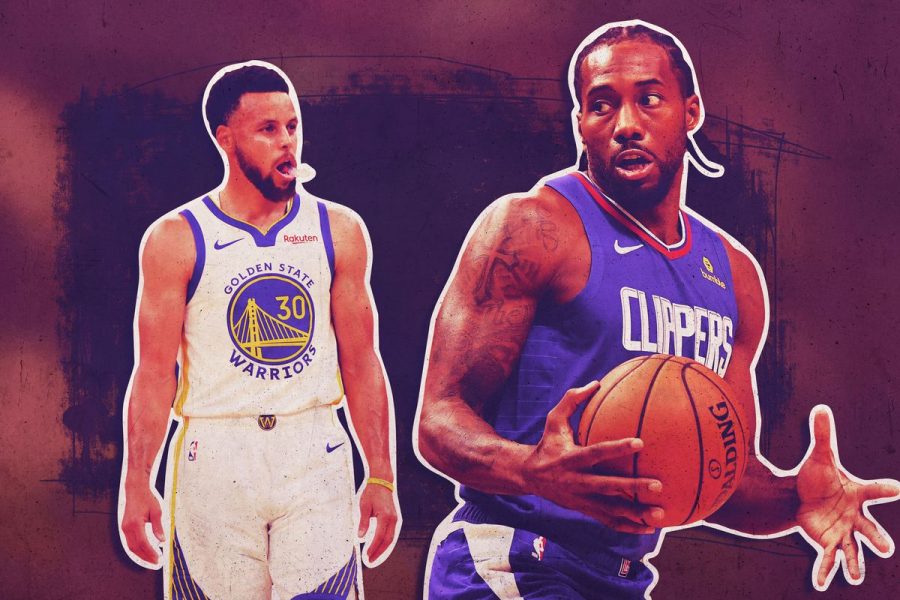 The NBA season is underway and already heating up. This past offseason restructured the hierarchy of the league and has fans more excited than ever as the Warriors super team era is over for now. Many teams went through big changes. Some non-playoff teams are now contenders, and title contenders from last year may not even make the playoffs.

The Golden State Warriors, who have won 3 of the past 5 NBA championships, perhaps the most dominant team we have witnessed in NBA history, just lost its best player in Kevin Durant. Durant was sent to the Nets in a sign and trade deal for D’Angelo Russell. After a scary fall in late October, Stephen Curry broke his hand and is expected to miss three months. The Warriors already have to play without their star shooting guard Klay Thompson for most of the season, as he continues to heal from a torn ACL. The Warriors lost Andre Igoudala and Shaun Livingston in the offseason, who were key contributors to the bench unit.

Many NBA fans were expecting another MVP season from Stephen Curry with the loss of Durant and Thompson’s injury. According to the betting website OddsShark, he was favored second behind Bucks small forward, Giannis Antetokounmpo, but after Curry’s injury, the Warriors playoff chances took a huge hit.`

The two teams from Los Angeles, the Clippers and Lakers, added some talent to their rosters. With Lebron James aging and the Lakers missing the playoffs last year, they went all out in an attempt to make one final championship run for Lebron. The Lakers added an MVP candidate in Anthony Davis by trading away the young core they had. Yet, they added some veteran players including a key contributor in the Raptors championship run last year, Danny Green.

On the other hand, the Clippers were a playoff team last year and took the Warriors to six games as an eighth seed without the new players they added this offseason. They signed the current Finals MVP, Kawhi Leonard, and an All Star in Paul George. The bench is stacked as well with three-time Sixth Man of the Year Lou Williams. This seems to be the most talented team in the NBA and they are ready to make a run at the title.

The two LA teams aren’t the only teams that are trying to make a run in a wide-open NBA. The Houston Rockets, after losing to the Warriors in the playoffs for the fourth time in five years, finally made a big move. The Rockets traded for Thunder point guard Russell Westbrook, giving up Chris Paul and draft picks in the deal. Current Rockets superstar James Harden and Westbrook are former teammates now reunited with a common goal. Many people doubt Harden and Westbrook’s ability to win a championship, but now both have a chance to prove everyone wrong.

In the Eastern Conference, things aren’t as exciting, as it is a three-team race with the Bucks, 76ers, and a sleeper team in the Celtics expected to battle for the top spot. With the Bucks being the favorites to make it to the Finals, they have kept the same roster but the thought is that the current MVP Antetokounmpo will become an even better player.

The 76ers, meanwhile, retooled and traded away All-Star Jimmy Butler to the Miami Heat for a good young player in Josh Richardson, while also signing center Al Horford who was a key player for the Celtics. Horford isn’t the only player they lost. Kyrie Irving left for his hometown team, the Brooklyn Nets, but they replaced both players by signing All-Star point guard Kemba Walker and center Enes Kanter.

With all these teams gearing up for a chance at a title, many people are still talking about Zion Williamson, the Pelicans rookie who is expected to lift New Orleans in the future. He is the most hyped prospect since Lebron James. Zion will miss the first six to eight weeks with a torn meniscus, but is still expected to earn Rookie of the Year honors.

So with this shaping up to be one of the best NBA seasons in years, my predictions are the Clippers facing the Bucks in the finals, with the Clippers winning it all for the first time in franchise history. Kawhi Leonard will be taking home the Finals MVP for the second straight year.