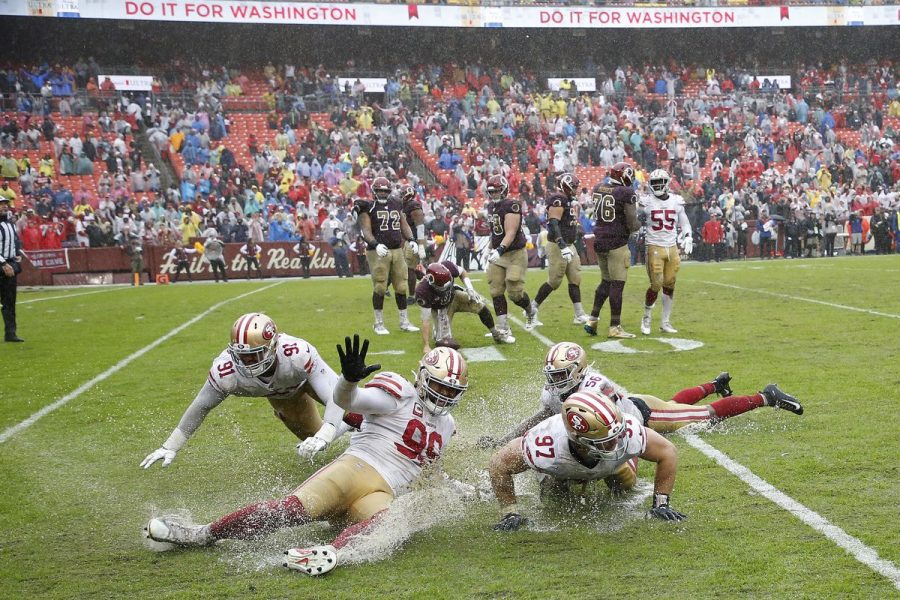 Ever since 2012, the faithful have been punished with a horrible five seasons including no playoff appearances and finishing almost dead last every year. With new management and big time acquisitions through the draft and free agency, 49er fans have had a lot to enjoy this season and beyond. This year, the 49ers have been red hot with a 8-0 start, silencing analysts and media “experts” along the way.

Head coach Kyle Shannahan is one of the game’s best offensive-minded coaches  and has been with the Niners for three seasons. General Manager John Lynch was added the same year as Shannahan, forming a witty duo to lead the team into the future.

Management started out slow, but over time have gotten the right pieces and now look like true contenders in a league and division with tough talent to face up against. The recent 20-7 win against the previous NFC champion Los Angeles Rams proves promising times are coming for the faithful.

With their defense being one of the best in the league, free agent acquisition Kwon Alexander has provided a new energy the front 7 needed, and star pass rusher Dee Ford only adds to that talented defense after being acquired for a second round pick. Unfortunately, Alexander is out for the season with a torn pectoral muscle, but promises to be “legendary” for next year.

Also helping to build the D is the second overall pick of the NFL Draft, Nick Bosa, the star pass rusher from Ohio State. This selection once again adds to the front 7, with 5 talented first rounders on the defensive line.

On the offensive side of the ball, second round draft pick Deebo Samuel has emerged as one of the top receivers for the team heading into the midseason. Also adding to the offense is Emmanuel Sanders, a two-time Pro Bowler which the team acquired last month. He is expected to bring his explosiveness to the Bay.

Sophomore Will Carlson spoke about his excitement following the Niners 8-0 start.

“It’s exciting for sure, it’s nice to have good football back in the Bay,” Carlson said. “They’re a top five team in my opinion; that next to the Seahawks, Saints, Patriots, and Chiefs.”

The players on this team that were not brought in from free agency and mostly draft selections have really stepped up as high-graded players in the league, and have truly boosted this team both defensively and offensively.

Tight End Geroge Kittle, who was a 5th round pick, is emerging as one of the league’s best at the position in his third season. He broke the all-time receiving yards in a season record last year with 1,336. Kittle looks to be the dominant favorite Tight End in the NFL moving forward.

The 49ers go by a couple of mottos for the season, as experts who doubted their strength called them “pretenders” which ultimately stuck and is used as motivation for the squad. The infamous quote by defensive coordinator Robert Saleh has been the driving force,  “All gas no brakes.”