The Impact of Brexit in Europe and Beyond 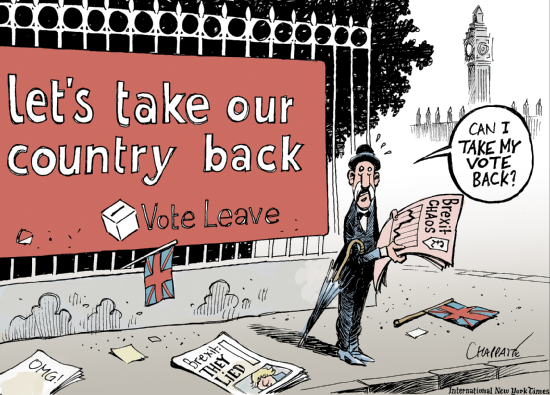 In 2015, the conservative general election victory in Britain proposed a new manifesto, pledging a complete removal from the European Union. Most Brits decided that their country was better off not partnered with the E.U. Brexit was supposed to roll through late March 2019 but the date has been pushed back due to a lack of understanding in parliament.

52 percent of British people voted in favor for Brexit while  48 percent were not in favor. This deal does not only impact the E.U. but the world as a whole. If the deal passes, America’s economy would be affected in a good way, with expected retirement rates to increase and mortgage rates dropping. This deal is quite controversial in the U.K.

U.S. President Donald Trump stated that America and the U.K. would have a “phenomenal” trade deal between the two historically close countries. However, if the deal doesn’t pass, the US-British relationship could weaken as the English have wasted such a perfect opportunity in creating a great deal. This deal could very much strengthen the bond between America and the U.K.

Traveling to the U.K. might get a little expensive. If the deal passes, there could be an increase in the amount of money travelers will be forced to spend. If people are invested in any British stocks, they will most definitely be affected by the deal. Boris Johnson declared that he would “Sweep away barriers” between the two countries trading wise.

Both World leaders are optimistic with Brexit and their future trading deals. However, the U.K. also has the potential to lose trade with the U.S. with the loosened restrictions that come with Brexit. Most experts believe that the Brexit deal will benefit the U.S. economy, but there is still no real way to tell.

Boris Johnson has been having trouble passing Brexit, and time will tell if still has an opportunity.

“In regards to the United States relationship with the United Kingdom, given the special relationship, shared culture, history, and language, I would imagine they would begin to work out a new trade deal,.” Novato High social studies teacher Danny Kambur said, ”Populous President Boris Johnson, granted the different electoral system in the United States. Ii’m not sure how long he will last, or maybe he’ll be like his predecessor Theresa May.”