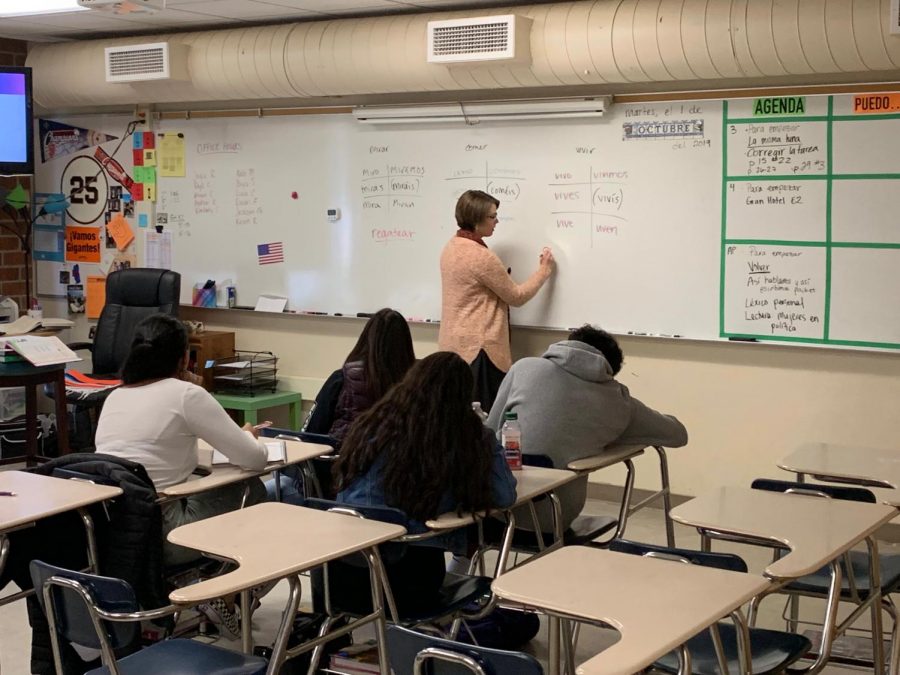 Despite these contrasting student views, some teachers and staff believe that the Spanish instruction at Novato High has served the student population well.

Principal Mark Brewer has continuous belief that students at Novato High have excelled in the spanish program.

“Overall, it’s effective because we produce some really high quality students, especially senior year. And we get a lot of them that get that new certificate (by literacy),” Brewer said.

Whether it’s effective or not is up to the students’ individual experiences and their personal growth throughout the program.

Yet, many students have had negative experiences within the Novato High Spanish program.

Hope Spinelli, a junior at Novato High, described her experience.

“We didn’t really do much in that class. The class was quite disorganized. I think that I have not really learned anything,” said Spinelli.

Clearly, there are students who feel much differently than Brewer on the quality of the Spanish instruction. Spinelli, along with other students, has had bad experiences in lower level Spanish classes.

However, students that have reached higher levels of Spanish instruction have had different experiences. Senior Sophia Steddin an AP Spanish student, weighed in on her experience in the Spanish courses offered at Novato High.

“I think Novato High has done the best they can, but with learning a language it comes down to being immersed in it,” Steddin said.

Kaya Sheean, another student with the same teacher as Spinelli had a similar experience.

“Barely, I learned like one thing …My second year my teacher didn’t teach at all,” she said.

Regardless of the level of instruction, the quality of the teaching should be of equal quality for all levels and grades.

Spanish instruction at lower levels is also extremely important for setting the tone and providing students with the experience of a good class which could motivate them to continue onto higher levels of Spanish instruction. The current AP Spanish class here at Novato High only has one period with 27 students. Compared to the vast numbers of students in Spanish levels one through three, statistically there should be a greater number of students in AP Spanish classes.

Part of the reason could have to do with the individual student’s motivation to excel in Spanish class. Karen Maass, the head of the spanish department, and a spanish teacher here at Novato High weighed in.

“I think it depends on the student. It all depends on who they have from Spanish 1 to wherever they end. But a lot of it has to do with the individual student’s motivation,” Maass said.

Maass, who teaches the AP Spanish class at Novato High has seen many students come and go through the program. Considering the feedback from some staff and teachers, student’s motivation to learn the language dictates how well they do in the end. Many believe you choose your grade the minute you set foot in the classroom.

According to most lower level students, the quality of instruction is lacking in a number of ways.

The Spanish program at Novato High has accomplished things such as AP students with a literacy certificate and proficient speakers, but it has also provided instruction that has not served the student population in a way that they are inspired to continue mastering the language.

Nevertheless, according to student consensus, the administration needs reevaluate how functional and successful the Spanish program is. If Novato High’s purpose is to educate students at the highest of levels, it could be prudent to refurbish the Novato High Spanish program.