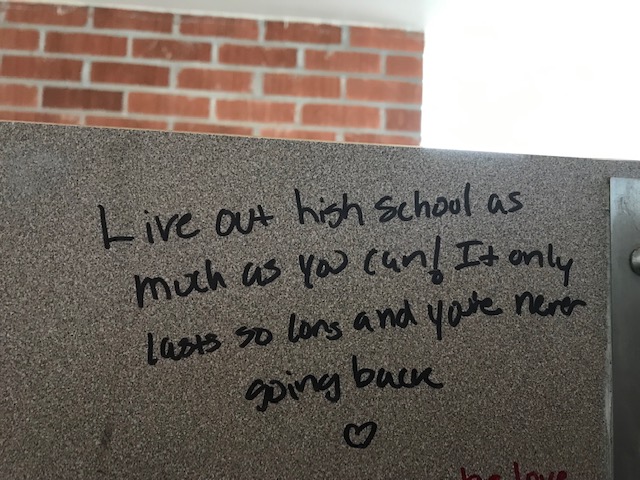 It’s fascinating to see how each gender’s bathroom graffiti differs, and its effect on students on a day-to-day basis. It shows differences in gender behavior and can even be placed into the categories of dangerous and helpful.

One stall in the girls bathroom along the 2600 wing has been filled with words of encouragement, lighthearted, wholesome memes, relationship-centered comments, and inspiring quotes. Although there is profanity in both gender’s bathrooms, those in the girls aren’t aimed to be offensive, as some agree that the writings are simply to elevate the atmosphere or add humor to their message.

A study from Gender, Place and Culture journal, where they studied 5 men’s bathrooms and 5 women’s at an unnamed college, revealed that it’s not just at Novato High that women share uplifting thoughts through bathroom graffiti. Even in colleges during finals season, there will be scattered messages to brighten someone’s day. Occasionally, they will even branch out into bolder statements.

At Novato High, some messages are intended to provide a voice for students’ rights and requests.

“We are not meant to sit idly in a classroom for 7 hours,” was found written in one bathroom, demonstrating graffiti can be a good way to express brave statements. This was the most recent graffiti that was removed from the girl’s bathroom in a while.

The boy’s bathroom however, has to be cleaned quite often. The kind of graffiti in their bathroom tends to lean more to the comedic side, which can be just as effective as an inspiring quote in brightening someone’s day, but also includes the more vulgar and offensive subcategory of humor.

Junior Kyle Decker said that he’s not easily offended but it depends on who the graffitti is aimed at.

“If you see a swastika and you’re Jewish, I can see that could be offensive,” he said.

The impact graffiti has on each person is drastically different. Depending on your family’s history, seeing a racist comment or symbol can ruin someone’s day, while not really affecting others. Yet, a joke, or humourous comment can feel less preachy than an abundance of inspiring and sappy quotes, and have the same positive effects the girl’s bathroom’s comments have.

Vandalism on public property is widely viewed as a crime, but graffiti (both street art and bathroom) and its removal has a lot of mixed opinions associated with it.

The racist and dangerous comments in the boys bathroom is usually taken down quickly, but the graffiti in the girls’ has been there for a while.

“I think we should have graffiti in the bathrooms because if you’re having a really [expletive] day and you go into the bathroom and there’s advice on the stalls, you know, your life is great,” said junior Sarah Krustchinsky with a smile.

The ability to anonymously share things that many people will see shows a lot about people. We see this on the internet, as people create and share inspiring messages, bold statements, and untamed jokes. It’s no different in a bathroom stall. Stereotypes are based on exaggerated characteristics, and whether we are proud of this or not, bathroom graffiti exemplifies this.