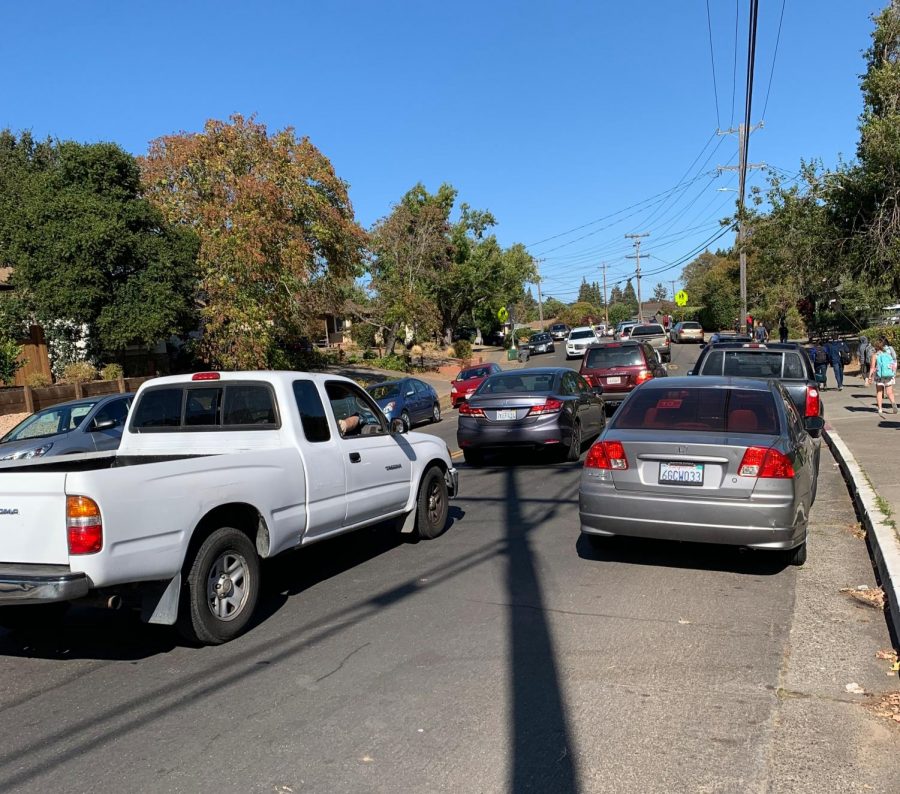 Getting to school on time, whether you’re driving yourself or not, is a struggle for many people simply due to the heavy traffic patterns surrounding Novato High. Novato High’s traffic is not only irritating to sit through, but also has a direct impact on a student’s ability to learn when they miss the first ten minutes of class, just trying to find a place to park.

With Arthur being the only street leading to the school, it quickly becomes clogged with the excess of students trying to get to their classes. Students who are passengers (aren’t driving themselves) may be prompted to get out of their cars and continue on foot towards the school to avoid getting a tardy, but those driving themselves have to find a spot to park legally, while still being on time.

“I was late for the first two days of school. You have to come at least 20 minutes before the bell rings or you can expect to be late, unless you’re in line at like 7:48,” Anderson said.

In addition to setting the alarm clock earlier, other solutions to avoiding the traffic could include carpooling, or for future years, trying to balance the amount of kids starting either first or second period.

Tardies, due to being stuck in traffic, are especially prevalent for those who start with first periods, as well as on Wednesdays, when everyone starts at the same time.

To further add to the mayhem, because of the multitude of new additions and renovations coming to Novato High in the coming years, including a new science building, Performing Arts Center, and a variety of new sports facilities, Novato has been forced to close the back staff parking lot, combining it with the students.

This year, the usual 140 spots in the student parking lot was cut down to accompany for 39 new staff spots. This means 39 more students have been forced to park on the streets surrounding Novato High, causing a significant increase in the difficulty when it comes to finding a place close to school. Fortunately, once the construction concludes, there are plans to rebuild the staff parking lot and return spots back to students in the following years.

Unique to Novato, having the Marin School of the Arts means many students commute here from elsewhere. Novato High has students living as far asVallejo and Santa Rosa.

Senior Ava Pometta, enrolled in the MSA Drawing and Painting and photography program, lives in Petaluma and discussed getting to school on time.

“Living far away can really affect being on time in the mornings. Having seven periods my entire four years, I’ve always been rushing in the morning to beat the traffic to school. Not only is there traffic through town but there’s traffic on the highway and Arthur before school,” said Pometta. “I think it’s unfair that teachers don’t consider how far some students have to travel, and sometimes don’t even give us a minute or two without counting us late.”

Ultimately, it looks to be an ugly year on the surrounding streets for both students and teachers.