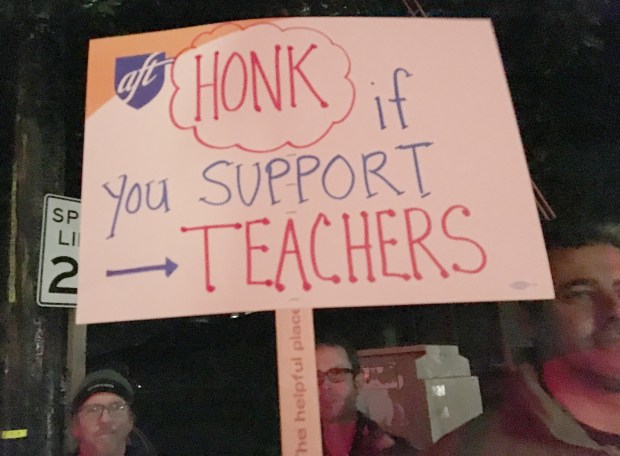 On December 4th, 35 teachers working for the Novato Unified School District took to the streets to protest the major pay issue that is currently on the minds of many educators in Novato, as well as educators throughout the rest of the U.S.

The reason behind this problem facing Novato schools is complicated. In a nutshell, school districts in California are funded in various ways depending on a variety of factors. 90 percent of school districts in Marin County, such as the TUSD are funded by property taxes within their district lines. NUSD, however, is not a Basic Aid District and simply receives the baseline amount of money that the state of California provides. The two systems create a massive difference in funding, with NUSD’s $11,000 per student and TUSD’s $17,000 per student. Some districts in Marin even produce up to $30,000 per student.

NUSD Superintendent Jim Hogeboom commented on the effects of the current system in an email.

“While this is totally unfair, it is also a reality, and it prevents us from being competitive with the other districts in Marin, 90% of which are Basic Aid (property tax system) districts,” wrote Hogeboom. “The bottom line is that since they receive much more money than we do, they are able to pay their teachers more money than we possibly can.”

The lack of salary makes it nearly impossible for some teachers to reside in Marin County.

Aaron Fix, Union President and Science teacher at Novato High, commented on the challenge of living where you work.

As a result of the poor compensation, many NUSD teachers flee to neighboring districts, forcing yearly turnover.

“Yes, we hate to lose our great teachers to Southern Marin, but we know we can’t really compete.” wrote Hogeboom. “Instead, we try to support our teachers the best we can, offer high quality professional development, listen to their needs, and support them the best we can.”

Although NUSD cannot pay their teachers competitively, they are currently looking into building affordable teacher housing on property close to San Marin High School. If constructed, this could help NUSD gain some competitive advantage over nearby districts.

As well, Fix describes the teachers union and NUSD as being “close to a settlement.” This would represent a small raise for teachers, a step in the right direction.