Remake of West Side Story Delivers for New Generation 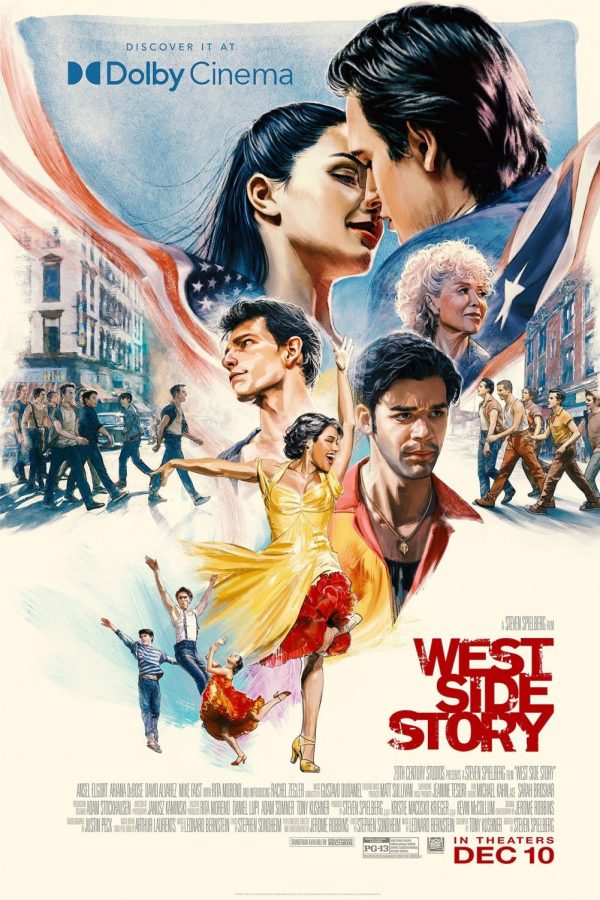 While it has become common for audiences to complain about the frequency of remakes and sequels in Hollywood, there are some remakes that easily match or even surpass their original source material by approaching it in their own unique way.

Musicals have also gotten a bad rap. I often hear the complaint that everything grinds to a halt for the characters to sing and dance, and that it feels unrealistic. In the best musicals, however, musical sequences move the plot along while also serving as an impressive spectacle for the audience to gawk at, much like an explosive action set piece.

2021’s West Side Story, nominated for Best Picture, announces itself as a new take on the old tale from the first shot. It takes us into the area in New York that would soon become Lincoln Center, bringing gentrification to the forefront of the film’s themes—the neighborhood that our characters live in is about to be demolished to make way for the iconic arts center. Along with other modernizations, such as a character who was initially portrayed as a tomboy instead being portrayed as transgender; this lends it urgency and makes it more relevant to modern audience.

The opening scene is fairly similar to that in the original, following the Jets as they patrol around the neighborhood. The Jets are a Polish street gang who feud with a Puerto Rican street gang, the Sharks, for control of the turf. At the end of the opening number, they get into a fight and plan to resolve their issues with a rumble. After this, the Jets’ leader, Riff, played brilliantly by Mike Faist, goes to his friend Tony for help in the war against the Sharks. Tony, played by Ansel Elgort (an actor recently accused of sexual assault), has just been released from prison and works for a Puerto Rican store owner played by Rita Moreno, who played a different role in the original film.

Tony reluctantly agrees to go to a dance at a local gym where the Polish and Puerto Rican youths are expected to mingle. In the introduction to this dance scene, director Steven Spielberg and his frequent collaborator, cinematographer Janusz Kamiński, begin to demonstrate their staggering talent, amassed over the course of their two lengthy careers.

The camera brings us into the scene in one unbroken take, a shot that’s impressive but never so showy it distracts from the story. Spielberg captures the movement of the dance beautifully, and effectively sets up between the dynamic of the dance. Even at a social gathering, there is a tension between the Jets and the Sharks that occasionally erupts into small conflicts. The contrast between the outbreaks of fighting and the elegant dance numbers that surround them emphasizes the central problem facing the kids. They don’t know how to be kids. The tragedy of West Side Story is that young life is wasted on pointless, petty conflicts because the young men in the gangs have nothing in their lives but that.

It would be difficult to cover the rest of the movie without entering into spoiler territory, so in case you aren’t familiar with the story, go watch it and come back!

At this dance, Tony meets María, the sister of the Puerto Rican gang’s leader, Bernardo. The two instantly form a connection and dance behind the bleachers where they can hide from their friends and family who might judge. When they come out, Tony gets into a fight with Bernardo, and from here on out it’s obvious that their relationship will never work. As Tony tries to explain that his intentions were good, and they were just dancing, Bernardo only grows more aggressive. From the very first moment, the love between our two leads only leads to violence.

The best sequence in the whole movie is the rendition of “Dear Officer Krupke,” in which the Sharks imagine explaining to the policeman who patrols the neighborhood exactly why they are the way they are. While the tone of the song is satirical (the lyrics include “My parents treat me rough/With all their marijuana/They won’t give me a puff”), there is an underlying tone of real anger and sadness. The setting of the number is moved from a street corner to the inside of a police station, and the boys seem to have a ball trashing it. This lighthearted dance gives us the sense that the boys are exercising their rare opportunity to have fun, when so much of their time is wasted on petty turf wars.

The devastating ending of West Side Story, with 3 of the main characters lying dead on the slick New York pavement, drives home the reason that the story is being remade to begin with. It’s also the reason it has endured since Shakespeare himself wrote it in the form of Romeo and Juliet.

Of course, audiences have always loved spectacular dance sequences and stirring romance, but West Side Story  is about more than just that. It’s about how the world makes young people bitter and angry. Sometimes this makes those young people prone to falling in love far too fast, an attempt to escape from their harsh reality. Occasionally, though, it drives them to violence with soul-shaking consequences.