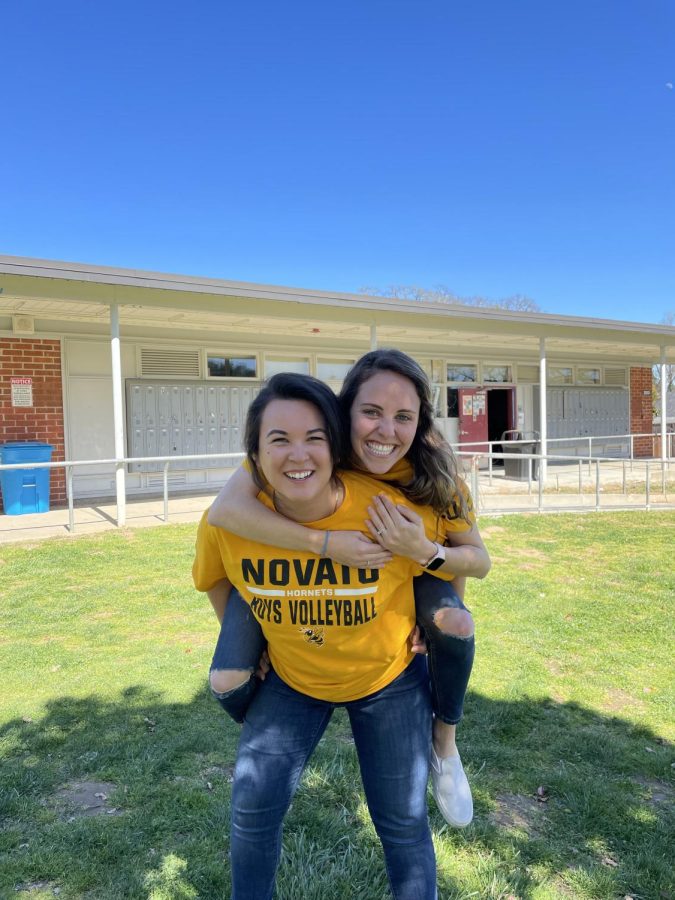 On the Novato High campus, it’s not uncommon to see Mrs. Buchholz and Ms. Seki hanging out. Both are fairly new teachers, yet they have contributed tremendously to their classes and team.

Buchholz is an AP U.S. Government, Econ, and U.S. History teacher.  Seki teaches AP Statistics and Algebra 2. Despite the different subjects, they have a lot in common. Both grew up in Marin County, played and coached volleyball, have similar teaching styles, and have always had a passion to work with students.

They both grew up playing a variety of sports but stuck with volleyball. They played CYO and club throughout middle and high school. Two years ago, a couple seniors found out that Buchholz played volleyball. Since it was their last season and they didn’t have a coach, they banded together to try to convince her to become the varsity coach. Seki wanted to help out as well but didn’t want to fully take on the big task.

“Both of us were in the same boat,” said Buchholz. “We wanted to contribute and be a part of it but neither one of us wanted to take it on on our own.”

“It’s nice getting to know students outside of class and seeing them in a different environment,” said Seki.

Buchholz and Seki have worked with kids their whole lives. They both coached and tutored, and knew they did not want office jobs for their careers. So, naturally, their favorite thing about teaching is the kids.

“I get to wake up knowing that I go to work everyday and what I do matters, ” said Buchholz. “It has an effect on people and will have a lasting effect on all the kids I see.”

Seki described some of the challenges they face.

“We don’t love being blamed for things,” said Seki. “It’s very easy for kids to want to blame us for their bad grades.”

Both Seki and Buchholz conduct rigorous courses and don’t apologize for their grading.

Classroom management is also an area they align. They don’t have set phone policies or rules because they want to let students make their own decisions, but they will hold their students accountable for their grades.

They enjoy building relationships with their students. They don’t want to be robot teachers and are very personable, yet always act professional.

“The better the relationship they have with you the more effective their learning is going to be and more likely to listen to you,” said Buchholz.

Many students describe them as hard graders. But in reality, the courses they teach are hard.

“I think what kids lose sight of is that AP classes are hard. We’re holding you to standards that you are going to be seeing in college. And us just going easy on you and grading you easier is doing you a disservice,” Buchholz added.

Due to COVID-19, AP classes have been slightly watered down. When Buchholz and Seki were in high school, they were really hard and not everyone took them. Taking more than two AP classes was not even allowed back then. They take pride in holding their upperclassmen students to a high standard.

Of course, they both enjoy having each other as an outlet at school.

“It’s nice to have a support system or someone you can vent to,” said Seki.

Talking with non-teacher friends about work-related issues can only help you to a certain extent, so having someone with your same interests in the workplace has been a major value for both teachers. Buchholz and Seki have connected in the academic world, the athletic world, and beyond.