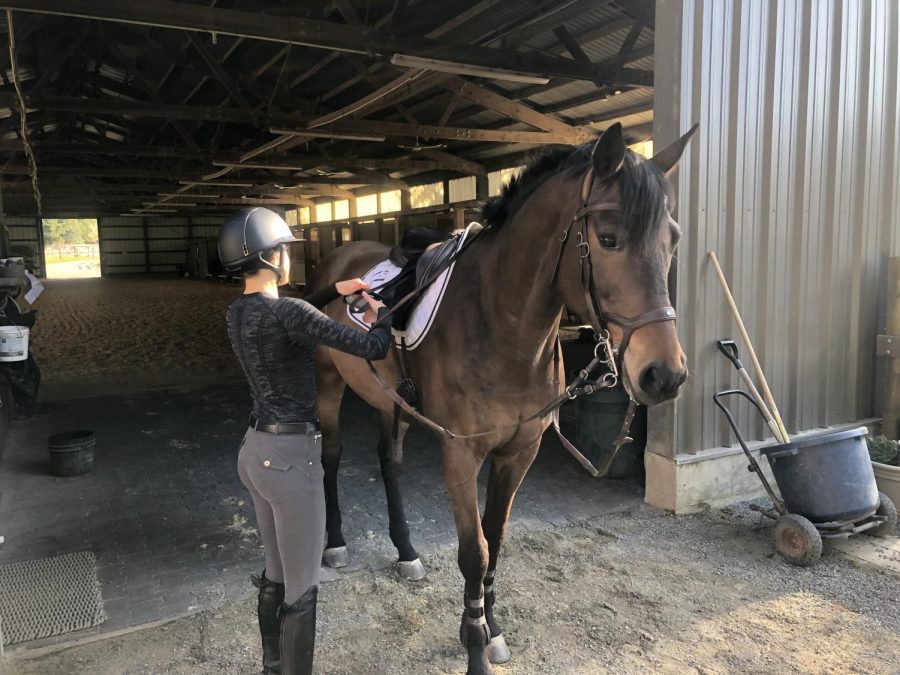 Ava Nielsen with her horse, Dante

Equestrian, a sport featuring horseback riding, is relatively unknown to most Novato High students. However, one Novato High student has a deep connection to this sport. Junior Ava Nielsen frequently rides and competes with her horse Dante, and was able to provide some insight into how this sport works.

Within equestrian sports, there are several different disciplines that include but are not limited to dressage, showjumping, eventing, and ranch work. Nielsen does eventing which is competing for 3 or 4 days in dressage, show jumping, and cross country.

“It’s the equestrian equivalent of a triathlon,” Nielsen said.

Nielsen has been riding horses since she was 6 years old, and for the last year has been riding a dutch warmblood from the Netherlands named Dante. Earlier this month, she showed me her daily routine of cleaning and tacking Dante before taking him out for a ride.

“I’m happy Dante isn’t grumpy today and he isn’t too tired so we should be able to get some good jumps going once we are on the course,” she explained as we rode out of the barn.

While she was brushing Dante, we spoke about her routine.

“I come out 6 days a week for a minimum of three hours a day depending on how many horses I have to ride,” she said. “The part I really love is that I have never had a day where I felt like I didn’t wanna go see the horses.”

After warming up Dante by letting him walk around, we arrived at the jumping course where I was able to see the competitive side of riding. Nielsen was able to explain how competing works in the sport.

“You generally have shows once a month over a course of four days each,” she said. “The season normally lasts from February to November.” When asked about the distance of these shows, she explained, “some are as close as an hour, while others are in other states.”

Nielsen has been showing for the last three years and has won several awards in her level. Right now, she is aiming to go to the North American Youth Championships in 2023.

Nielsen doesn’t just ride her horse though; she also has to regulate Dante’s diet by providing a nutrition plan to help him sustain his energy levels and increase his recovery time.

This sport is filled with beauty and excitement, however, equestrian injuries can also occur if you end up being bucked off a horse or are kicked by a more aggressive horse.

Nielsen explained some of the injuries she has had plus others that regularly happen.

“I have broken both arms, chipped my tooth, and sprained my elbow falling off of horses,” she said. “Other common injuries you see are spine injuries because you fall from pretty high, you can get hurt getting stepped on by horses, and the top eventer in the United States right now, Boyd Martin, he has broken 15 bones over his career or something like that. You just take Advil a lot and it normally fixes the problem though.”

So even with all of these injuries, why does Nielsen continue to do it?

“I first started doing it because of my love for horses, and as I grew older, I started loving the community and the competition you get from the sport. Now I just want to see how far I can go in my junior career and hopefully get a state or country ranking,” said Nielsen.

She also described the mental health benefits of the sport.

“It’s really nice to do a sport outside of school that can form a kind of escape from everything and gives me my own space to be myself. It’s therapeutic,” she mentioned.

The equestrian experience has been extremely valuable for Nielsen. Viewing the sport in action is also pretty awesome. Spending one day at the ranch and seeing how much control a rider can have over their horse was very impressive. Equestrian can also provide a new experience for people looking for a productive and fulfilling outdoor activity.