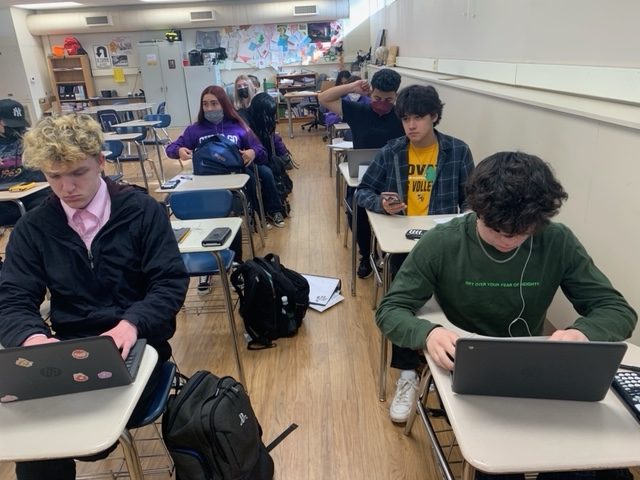 NHS students in a classroom following the lifted mask mandate

Over the last few school years, from endless Zoom calls to a very different return to school, students have experienced some major changes. Now, after all the discomfort and waiting, a very big step has been taken toward normalcy. On Monday, February 28th, California Governor Gavin Newsom announced that starting March 12th, almost exactly two years since COVID-19 arrived, the state-wide mask requirement for all schools would officially be lifted.

In a press conference, Newson said that “California continues to adjust our policies based on the latest data and science, applying what we’ve learned over the past two years to guide our response to the pandemic.” This comes as a major relief for many students who have wanted to take off the masks. While the CDC still highly recommends a face covering when possible, the vast majority of students have ditched the masks.

“If students have the vaccine and have the booster, we should be allowed to have our masks off,” said sophomore Ezra Portillo, who decided to not wear his mask in class.

Many students and teachers seem incredibly relieved at this news. For many teachers, masks have presented some obstacles in teaching their subjects. A final removal of these challenges is more than welcome.

“Lecturing in it is awful,” said AP European History teacher Jason Searle. “I get a lot of feedback from people’s faces and expressions, and while I’ve gotten much better at reading people’s eyes, it’s much harder to read [them]. I honestly think that because people have been masked for almost two years now, there’s probably a lot of people that don’t have that kind of social awareness that they should have.”

Despite the popular opinion being that masks being off is a welcome change, there are still people who believe that this decision is a little premature. The recent Omicron variant hit its peak in Marin County with 657 cases being reported in one day alone on January 4th. While these numbers have dropped off significantly, as we are currently averaging 25 cases per day over the past two weeks. This begs the question of how much this removal is bloating those numbers.

“I just want to stay safe,” said sophomore Jordan Wadford. “You never know who has what, and I just think it would be safer to keep it on at least most of the time.”

As with any COVID-related announcement, people were happy, shocked, and even perplexed about this fairly controversial announcement.

Mary Jane Burke, Superintendent of all Marin County Schools, explained the reasoning behind the timing of this announcement.

“The timing is based on all that we have learned about COVID-19 over the past two years, and state and local public health projections on declining case rates and hospitalization rates,” Burke explained. “Our high vaccination rates, and vaccine effectiveness in reducing transmission are also part of the reasoning. In Marin County we can be proud that we have achieved one of the highest vaccination rates in the state.”

Moving past all of the controversy and opinions based off of this news, the fact still remains that this mandate that has been looming over us for two school years is officially in the past. Whether you consider this move to be just the thing you were waiting for or you think that it is happening way too soon, the classroom experience is inching a little bit closer towards that previous world before COVID.