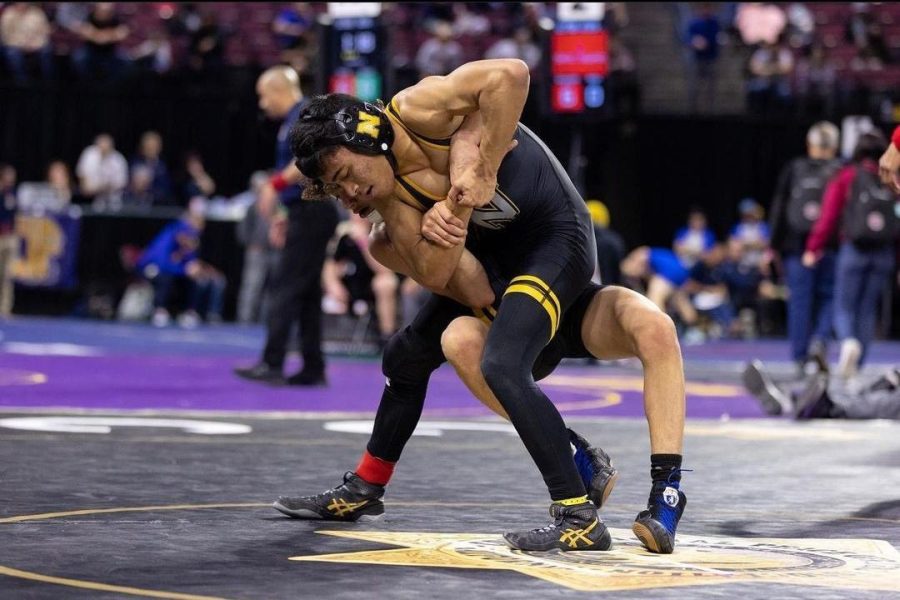 Madayag in action at the state tournament in Bakersfield

For most high school wrestlers, freshman year is the first experience they have with the sport. Everyone starts out as a raw talent, trying out a sport they have little to no experience with. The reason for this is that there are hardly any programs or opportunities for youth wrestling, especially in Marin County.

One Novato High wrestler, in particular, is an exception. Junior Kekoa Madayag was lucky enough to gain experience and receive high-level teaching and expertise of the sport, starting as young as a 6th grader.

Madayag attended Hamilton Middle School. In 2016, when Madayag was a 6th grader, current Novato High assistant wrestling coach, Rafael Ayala, took the job as the middle school P.E. teacher at Hamilton. Ayala trained a small group of 4-5 wrestlers, including Madayag, almost year-round. During the school year, they would train in the school’s gym, and throughout the summer they would use the Old Hamilton Gym. As the group started to grow, they entered a few tournaments during Madayag’s 8th-grade year.

“I started wrestling in 6th grade when the wrestling coach (Ayala) came to my middle school to run P.E.,” Madayag explained. “That was my first experience with wrestling, but I actually didn’t plan on joining the (middle school) program. It was one of my close friends that I did jiu-jitsu with that talked me into joining. After a couple of weeks of practice, I began to really enjoy it and decided to stick with it going into high school.”

Ayala has been able to witness Madayag develop as a wrestler, starting as a novice middle school boy, into a strong young man competing at the highest level of high school wrestling. Ayala spoke on what it has been like to see Madayag grow and develop over the years.

“Kekoa had a drive when he first came out. Winning local tournaments wasn’t enough for him. He always wanted the next level of competition. He sought it out then, and he seeks it out now. Moreover, he isn’t done improving,” said Ayala.

This early training made Madayag a very advanced, seasoned wrestler heading into his freshman year of high school.

This year, the Novato High wrestling team had a season to remember, as they went undefeated in the regular season and were crowned MCAL regular season champions. Novato exceeded all expectations and took the league by storm, as they grinded out some close victories against MCAL powerhouses like Redwood, and blew out teams toward the bottom of the standings, to finish with a 6-0 record. It was a great team effort by Novato to accomplish this impressive feat. A huge part of the team’s success was that they were led by MCAL Boys Wrestler of The Year, Kekoa Madayag.

Madayag may not be the biggest or most intimidating wrestler you’ll see, but his heart, passion, and effort are unmatched. Madayag competes in the lightest weight class, weighing in at just 106 pounds. Madayag contains great composure while wrestling, and never cracks under pressure. He has what his coaches describe as ‘quiet confidence’.

“He (Kekoa) is a man of few words, but you can see he is absorbing everything that is done,” Ayala explained. “When he does speak, he makes it count. He wrestles in the same way, and lets his wrestling do the talking.”

Madayag was able to overpower his opponents throughout the MCAL regular season, as well as in the final MCAL tournament where Novato placed 4th out of 7 teams, finishing just half a point behind 3rd place Tamalpais. Although they were disappointed to not have finished higher in the final tournament, the Hornets had a lot to be proud of, becoming an elite MCAL contender after finishing toward the bottom of the standings in years prior.

“I am extremely proud of my team and how they performed during duals,” said Madayag. “I think one of the main reasons we were able to do so well during duals was because, for the first time in a long time, we had most of the weight classes covered. On top of that, I think the team this year genuinely fell in love with the sport and that alone is the start of a great team.”

Although this was the end of the Hornets’ MCAL campaign, the season was far from over for many Novato wrestlers, who qualified for the North Coast Section (NCS) tournament. Wrestlers who place top 3 in their weight class at the MCAL tournament qualify for the NCS tournament.

The Hornets sent a total of nine wrestlers to NCS: Ahani Marin-Vazquez, Diego Ramos, Josh Pena, Charlie Onorato, Alex Tejada, Firas Khan, Kekoa Madayag, his younger brother Ikaika, who is a sophomore, and Luana Stathopolous who competed in the boys MCAL tournament (there weren’t enough wrestlers in her regular girls class). Stathopolous ended up placing 2nd in the boys MCAL tournament, which qualified her for the girls NCS tournament held at Albany High School.

Of these nine wrestlers, the ones that made the deepest runs in the NCS tournament were Stathopolous, who placed 2nd in the girls tournament, and Madayag who took 1st place in the 106 lb. weight class. Madayag entered the tournament as the outright #1 seed and battled his way through four tough matchups (two of which were pins), en route to the championship matchup.

Madayag matched up with Roland Baca of the host school, James Logan High, in the championship. Madayag and Baca faced each other previously in the season, at the Liberty Lou Bronzan Invitational, in which Madayag edged his way to a 5-4 victory decision. In the long-awaited rematch, Madayag’s success continued, cruising his way to a 9-2 decision to defeat Baca and claim the NCS championship.

This meant that both Stathopolous and Madayag would be heading to state, as the top 3 wrestlers from each class qualify for the boys tournament, and the top 4 qualify for girls. Madayag was very excited to have qualified for state, as it has always been a goal of his and he was denied the opportunity last year due to Covid.

“I was really excited to compete at State,” said Madayag. “I had my sights set on State since freshman year and it felt really good to finally have the opportunity to show off all the work I’ve put in since then.”

Madayag and Stathopolous made the trip down to Southern California along with their coaches and some teammates, who were there for support. The tournament was held at the Mechanics Bank Arena in Bakersfield. Madayag placed 7th at the tournament, becoming the first NHS athlete to medal at State since 1992. Stathopolous, who was the first girl from Novato High to make State since 2013, ended up going 2-2.

Novato High wrestling is hoping to continue their success next year, as they return all but two wrestlers. Both Kekoa and his brother, Ikaika, will be teammates for one final year. Ikaika had an impressive sophomore season himself, in which he earned First-Team MCAL all-league honors. He is expected to follow in his brothers’ footsteps, already displaying the potential to compete and find success on the biggest stage.

“My little brother and I have been practice partners for years,” Kekoa explained. “I think rolling together has made both of us better wrestlers overall.”

Kekoa has even higher hopes for next year and is looking forward to the future of his wrestling career.

“Next year, I hope to place higher at state than I did this year. I’m aiming to place top 5,” said Madayag. “After high school, if I go to college, I’ll definitely be wrestling but as of now I’m not sure what my exact plans are.”

Expect to see both of the Madayag brothers and the rest of the Novato wrestling team continue their success for years to come.