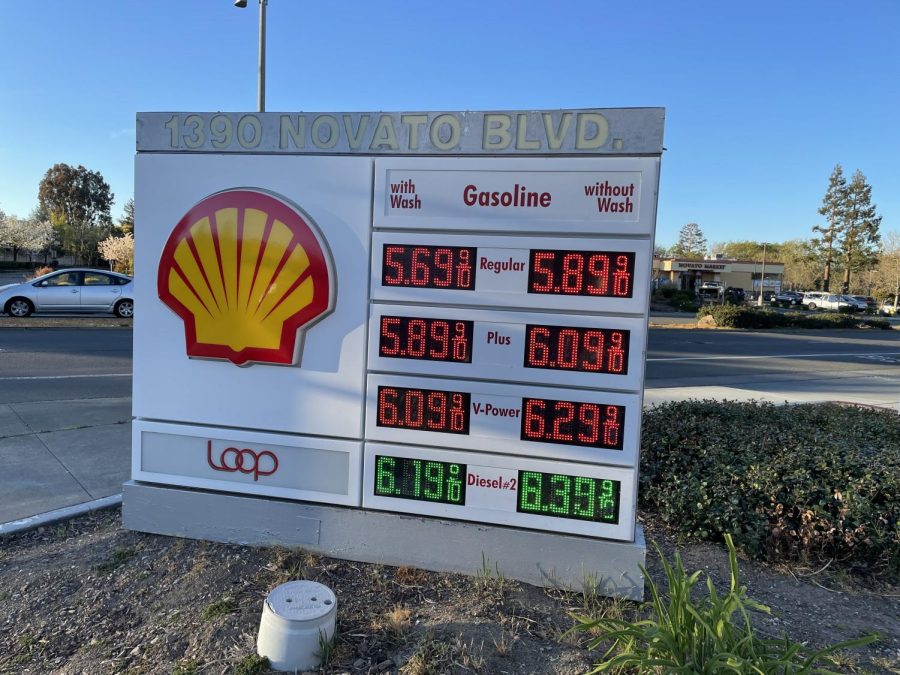 As the war between Russia and Ukraine escalates, many Americans have been concerned about the effects the war will have on the American public. The most noticeable effect is the rapidly rising gas prices.

Between February 26 and March 4, gas prices rose about 20 cents per gallon in a single week. Per barrel (42 gallons), gas has also risen an additional $7. Since March 2021, gas prices have risen more than a dollar per gallon for the U.S. average.

This short-term rise in prices is primarily due to the ongoing war between Russia and Ukraine. The United States and other NATO countries have placed sanctions (penalties imposed on another country to hurt that country or individuals in the country economically) on Russia. They froze Russian international assets, banned trades with specific individuals, and removed many banks from SWIFT (a messaging system that makes international banking and financial transactions easier). These sanctions increase prices because the U.S. and other NATO countries rely on Russian oil.

“My understanding is that the gas prices are rising because we get a large amount of our crude oil that we utilize to make gas from Russia. We, along with several other countries, are putting sanctions on Russia. We’re limiting the things that we’re buying from Russia to show our distaste for what they are doing to Ukraine,” she said.

With the already high gas prices and the ongoing conflict in Ukraine, gas prices are likely to rise more.

“I don’t think that the United States will easily back down on removing these sanctions because of the backlash we’d receive, because of what it means to remove these sanctions from Russia. I think [gas prices] will continue to rise quite a bit more before any kinds of mumblings of action, or any actual action will be taken with the sanctions.”

Since sanctions will probably stay in place for a while, gas experts will need to work around them. However, these extremely high prices are not exclusively because of the Russo-Ukrainian war. Gas and energy prices were already skyrocketing before the conflict. Inflation rates are at their highest in 40 years at 8% (for reference, a healthy inflation rate is about 2% to prevent deflation), with energy being disproportionately affected.

According to the U.S. Bureau of Labor Statistics, February’s average energy prices had increased by 37.9% compared to February 2021. This price increase is partly due to the Russia-Ukraine War but also COVID-related supply chain issues.

Some taxes can place a dent in a buyer’s budget. Though an 18.4¢ per gallon federal gas tax might not seem like a lot but added alongside state taxes, the price can add up. The federal, state, and local taxes can result in up to a dollar extra per gallon.

Californians, in particular, have notoriously high gas taxes, with a 51¢ per gallon excise tax and a 2.25% sales tax for motor fuel. Many counties have additional carbon and environmental taxes on top of statewide and federal taxes, resulting in even higher prices.

In Marin County, the price for 87 octane gas is inching towards $6 per gallon at many stations (a severe increase from $3.89 gas in February 2021). These prices strain the average American’s budget.

“I’ve driven less in the past week. Since I live far away, I have the option to take the backroads or the freeway. I’ve been using the freeway more since prices are high, and it takes less gas to drive on the freeway,” she said.

Some think that the U.S. should rely less on fossil fuels and that the country should switch to other alternative energy sources. Suggestions include using more electric vehicles and public transportation, and introducing more solar, nuclear, wind, hydro, and geothermal power. It would be a helpful transformation during this current crisis. However, this is a long-term solution and wouldn’t solve short-term energy supply issues.

Others think that the U.S. should increase fossil fuel production. This includes drawing back current environmental protections, increased fracking (a drilling technique to extract underground oil), more offshore drilling, and tapping into more fuel deposits. This solution would help in the short term, but it is unsustainable over long periods and damages the environment.

Our national and global leaders aren’t making firm decisions on which path to take. Until they rely less on oil, energy prices will continue to rise.