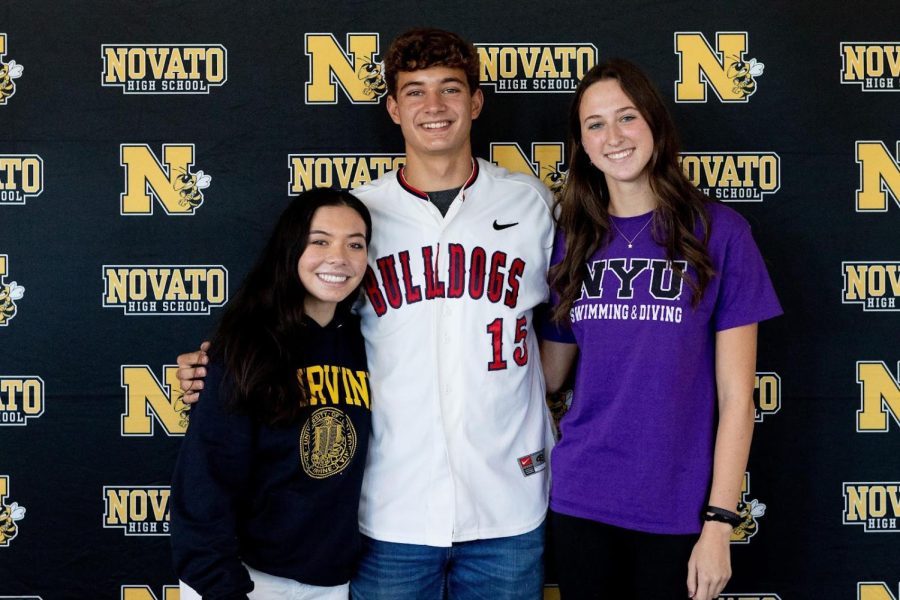 For many high school athletes, the dream of playing sports in college can be seen as an unattainable goal but for three Novato High athletes, this goal has become a reality. On November 10th, 2021, seniors Derek Bartram, Kaley McIntyre, and Kiana Briggs officially committed to college for athletics.

Bartram is planning to attend Fresno State in the fall, a Mountain West Conference school where he will play D-1 baseball.

“Fresno was the perfect option for me. It’s such a great atmosphere for athletes seeking to achieve their goals. The whole town is behind the athletic programs and there’s a common drive for greatness and success in athletics,” said Bartram, an outfielder and pitcher for the Hornets.

McIntyre achieved her longtime goal of attending New York University for swimming. She has been swimming the majority of her life and spends most of her free time in the pool. She has big goals for her athletic and academic future.

“I hope to graduate with a degree in history and explore the many historical places of New York. I also want to make it to the NCAA championship with my team and place higher than they have in the past, top three or even first would be amazing,” said MacIntyre.

Briggs, a former MCAL player of the year, has been a 4-year varsity golf standout for NHS. She is excited to continue her competitive golfing career at  UC Irvine.

Briggs has been planning this big step for a while.

“I started talking to coach Brooks in December of my junior year. I was playing really well and she offered me a spot on the team in March and I accepted it in early April. I’m really excited to play D1 golf in college,” she said.

Later this spring NHS will be hosting another signing opportunity for other NHS athletes who have committed to college. This will be a great opportunity to support fellow students and athletes.