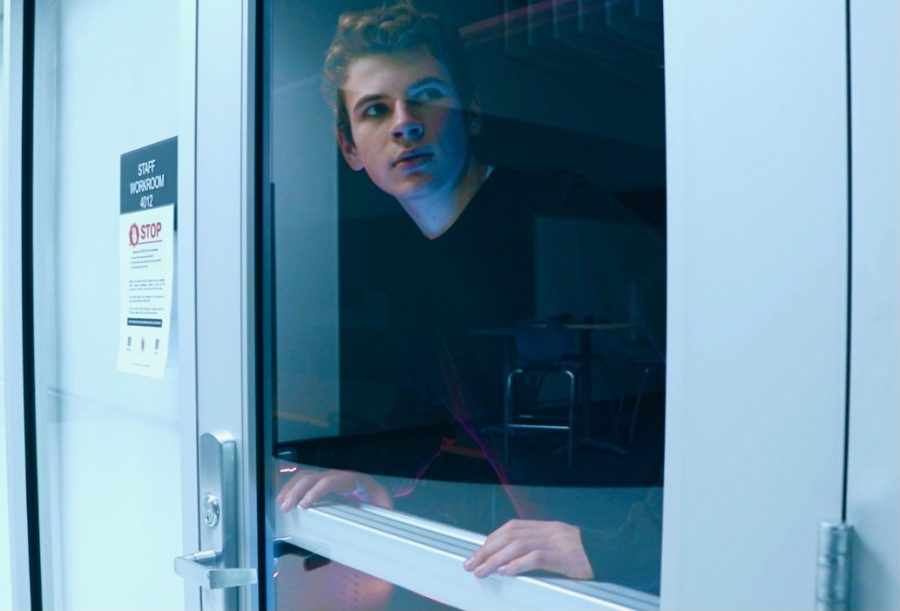 On Monday, January 17th, MSA Cinematic Arts teacher Philip Chidel received an excited email from a student. They wanted to inform him that they had seen a viral short film on YouTube, which was partially filmed at Novato High.

Chidel already knew this, as did every junior and senior in the Cinematic Arts program at MSA. The video, titled “The Backrooms (Found Footage),” was made by their classmate Kane Parsons, whose YouTube channel (now with over 450k subscribers) is under the name “Kane Pixels.” The video is firmly planted in horror territory–Parsons describes it as “analog horror,” which is horror shot using pre-digital methods or edited to appear as if it was.

The “Backrooms” comes from an internet subculture where anyone can make up stories surrounding a series of creepy liminal spaces inhabited by strange monsters. Parsons’ video is shot as if with a home video VHS camera, from the perspective of a character who is shooting a short film and falls into the alternate dimension known as the Backrooms. The character is then attacked by a surreal, sinister monster.

Parsons shed some light on his process in making videos.

“I aim to find intriguing concepts that personally interest me while also having a large potential audience,” he said.

Much of that large audience comes from the fact that Parsons’ videos are often based on existing properties, like the Backrooms. His first videos to get millions of views were animations based on the show Attack On Titan.

Parsons has dedicated huge amounts of time to his YouTube channel.

“Once I’ve come up with an idea, I spend pretty much every waking moment that I’m not at school on finishing it,” he said.

This level of dedication, decidedly uncommon in high school students, is part of what makes Parsons newfound virality unsurprising to those who know him.

Anyone hoping to emulate him to create their own successful videos might find that the process is more time-consuming than they had hoped.

“Once I’ve animated and am happy with how everything looks, I set the shot to render. This typically takes around 5-7 hours. Once I have my rendered shot, I bring it into Adobe After Effects, where I add the necessary post-processing. I typically manage to get 1.5 shots completed per day and fewer on school days,” Parsons explained.

So it’s not as if this is some random stroke of luck that Parsons’ video became a hit. It’s a hugely impressive technical accomplishment, not to mention genuinely scary.

The fact that the short film is so terrifying is a big part of its virality. A number of other YouTube channels have uploaded videos of them reacting to “The Backrooms,” which usually constitutes nothing more than jumping at the jump-scares and saying things to the tune of “Wow, what is THAT?” This is an unfortunate consequence of the internet age; the moment it’s clear something can be profitable, others will try to hop on the train and create their own content out of it.

Chidel, Kane’s teacher, spoke about his experience of the phenomenon.

“I’m trying to help support where Kane can take this creatively and business-wise, navigating this attention he’s getting, especially when it’s just something you’re creating alone in your bedroom, and now everyone’s calling you and you don’t know what their agendas are,” Chidel said.

Still, there have been major upsides to his video blowing up.

Parsons said, “I think the coolest part of this whole viral experience has been the new creative opportunities that it’s opened up to me.”

He certainly has a larger audience than ever before, and they’re invested in the world he’s building through his videos. His subscriber count nearly doubled in the wake of “Backrooms” exploding. Not to mention he’s been getting calls and emails from professional actors and studios.

If anything can be gleaned from the story of Parsons’ massive success, it’s that MSA is capable of helping to produce real talent. This should be a major selling point in attracting new students. Skills that are honed here can be used to find huge audiences and even make a living before you’ve graduated from high school. Not every aspect of the experience of going viral may be positive, but in a case where it’s all positive reception and appreciation of your talent, it’s hard not to envy and admire the person at the center of it.