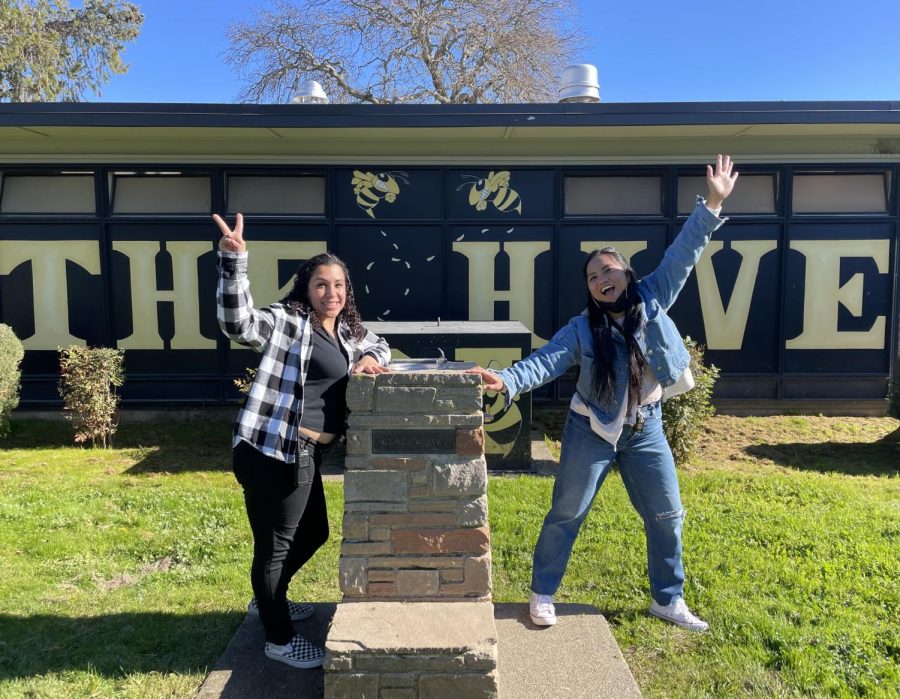 In a school year that has been rough for many students, two of the campus supervisors at Novato High School have brought a positive presence to campus. Fabiola Leiva and Stephanie Short have proven to be relatable, approachable, and social staff members for many NHS students.

When students finally returned from virtual school for the first time since March 13, 2020, the former campus supervisors had been replaced by current campus supervisors, Stephanie and Fabiola.  They were both happy to be hired.

“I was a previous employee, I used to work at San Marin. When I found out about the job, it was through my sister,” Stephanie said. “So I went online and filled out the application just like everyone else, and HR called me for an interview and I got rehired in NUSD.”

Leiva recalled her process too.

“I was working at San Ramon as a yard duty. There was a part-time position at San Marin and a full-time position at Novato High and I thought it would be more beneficial for me to work at Novato High being bilingual, so I applied for the job since I was already within the district,” Fabiola said. “I was told that same day that I was hired, one hour after my interview.”

Face-to-face interaction is crucial to the well-being and mental health of all people. Last school year, the pandemic had stripped students of that interaction. Almost an entire school year over Zoom and a return to campus with a restricted schedule along with limited school events contributed to poor mental health among many students. Yet, returning to Novato High and meeting two new, friendly faces felt like a breath of fresh air for many. Sometimes, even a two-minute conversation with them can completely upgrade your mood.

These two campus supervisors have developed strong relationships with a number of the students at Novato. Novato High junior, Samaje Featherstone, talked about the impact that Fabiola and Stephanie have had on him during his time at the school.

“Last year I was on campus, and I didn’t know anyone and I was in this shell toward everyone,” Featherstone said. “When I met Fabi and Steph, they made me come out of that shell and open up, live life, and do things kids do and that it’s not all about sports and social media. I really appreciate them for being there for me at all times for being a helping hand and someone I can rely on.”

Novato High sophomore Gerson Lopez also opened up about the ways in which Fabiola and Stephanie have had a positive influence on him.

“I was new to the school and I had so many problems. And, the person that helped me is Fabiola. The second one is Steph. They were there and they would talk to me, it was cool. Then they got me to play football,” Lopez said. “They stood by my side, they were caring; they still are caring. They’re the reasons I come to school everyday and I appreciate them being at Novato High.”

Fabiola and Stephanie talked about her experiences with Lopez.

“When I met him last school year, I wouldn’t think that he would be where he is now. This kid, he was out there and he was getting into things that he wasn’t supposed to be getting into, he was hanging out with the wrong crowd, he was getting in trouble out of school,” Stephanie said. “Now, he’s playing sports, and Michelle is helping him, and he’s having more of a direction. He’s more successful. For me, that’s one of the reasons I come to work.”

“I’m gonna tell you one of the main reasons I go to football games is this kid. He is one of the reasons I volunteer and I support him. I’ve created such a bond and I love him so much that if I need to volunteer for football or anything, not only him, anybody, I will be here if I can,” Fabiola said.

However, the job has its hardships too.

“It’s hard because it’s like, with being a parent, there’s days when you have to be the bad guy and there’s days where you have to be the good guy. Sometimes, when we have to correct behavior, we count on you guys respecting us enough to respond in a positive way, but that doesn’t always happen,” Stephanie said. “I think what’s also hard is the aftermath. Let’s say I caught you smoking, right? It’s the awkward part after, when we have to be like, how do we try to build this good relationship again?”

“If you’re at fault for something you do, kids like to blame me for stopping them. It’s not always my fault, your behavior is your responsibility,” she said. “And building a relationship and becoming your friends is very difficult. Building a long-term relationship.”

Fabiola added insight as far as what their ultimate goal is when interacting with students and developing these bonds.

“I want them to always know that somebody cares and somebody loves them. Many of these kids feel unloved, unwanted, and unsupported,” she said. “I’m not even a sensitive person, but lately I’ve created so many bonds with you guys that sometimes we see through your hurt and then we have discussions, and even we tear up, because it’s like, are we doing enough for you?”

Fabiola and Stephanie are a lot more than just campus supervisors. They will always listen to your problems, give great advice, or even just mess around and have a good time. Whatever you need, Fabi and Steph can reliably provide it. Novato High School is lucky to have these two special women on our campus, and having them here has had a truly positive impact on more students than one may think.