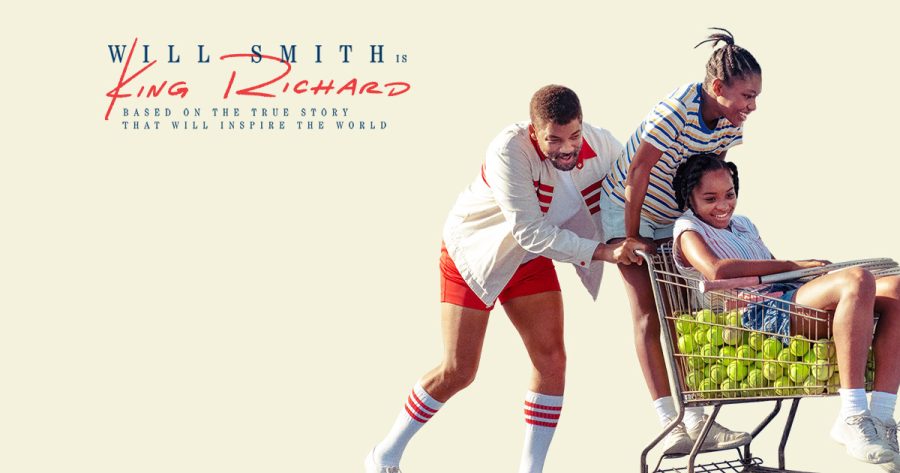 Now playing in theatres and streaming on HBO Max, “King Richard” is a sports biopic following the journey of a family whose unconditional support and belief ultimately produces two of the world’s most successful women athletes.

The movie focuses primarily on Richard Williams (Will Smith), the driving force behind Venus (Saniyya Sidney) and Serena Williams (Demi Singleton) becoming the world-famous tennis stars they are today. He works nights as a security guard and spends the days with his family, following his 78-page plan in training the girls on Compton’s neglected tennis courts, rain or shine. With their father’s unyielding commitment and their mother’s balanced perspective and smart intuition, the girls defy the odds and expectations set before them by the world.

The Williams are a family of seven living in a two-bedroom house in the ghetto of Compton, California, a town abundant with gang activity and crime. However, that doesn’t stop the Williams from going after their goals.

Venus and Serena shattered the standards for black women athletes in many ways. They were two of the first black female athletes to compete at such a high level.

“You have to watch King Richard. It is a true story of Venus and Serena Williams, 2 young black teenagers who take the tennis world by storm. It shows their life in Compton, L.A., the worst ghetto ever, and how they beat all the odds to become champions. Great film. Very inspiring.” Shelley Adams said.

It’s a great story with few flaws, but that’s not to say there weren’t any. After watching it together, my dad, BG Weiss, commented on how Richard Williams was portrayed.

“The reality of Richard Williams is that he was a womanizer and had a big ego,” he said. “Although the things he did for his kids put them in positions to be super successful, he was also an imperfect person and they downplayed some of his shortcomings like his personal benefit to doing all the things he did with his girls.”

The heartwarming film shows us that no matter our circumstances, if you want something bad enough and work hard enough, dreams come true, and this is proven true as we watch two of the most significant African American women athletes make history.