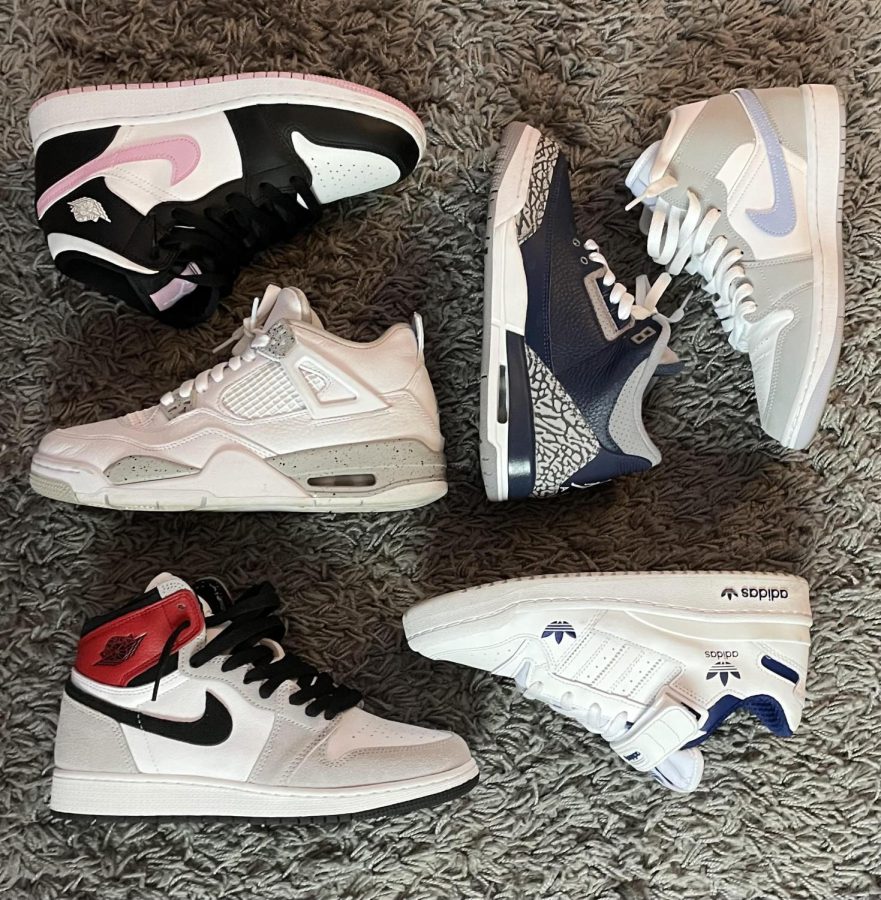 New fashion trends are always coming and going, but one that has remained strong for years is finding the most popular shoes. From Jordans to Air Force Ones to Air Max, the styles of the past are back in a big way.

The original Air Jordan sneaker was released in 1985 for Hall of Fame retired basketball player, Michael Jordan. Since then, these sneakers have taken over the footwear world, with thousands of models, color schemes, and collaborations (collabs) with other brands and celebrities. Prices of Jordans range from under $100 for less popular models, all the way up to $104,000 for the most expensive pair of Jordans ever sold.

A black and red edition of the original Air Jordan 12’s were worn by Jordan himself the night of the 1997 NBA Finals. That night, he played with flu symptoms but led his team to victory nevertheless. This colorway was nicknamed the Air Jordan 12 ‘Flu Game’, and although you can purchase a more current version of them today for around $300, the specific pair Jordan wore during that game ended up selling for a whopping $104k.

Nike’s best-selling shoe of all time is the Nike Air Force 1 ‘07 in white. Most people have seen this sneaker; whether it’s on our own feet, a friend’s, or famous figures. Air Force 1’s are built for comfort, with a design that keeps your foot low to the ground, as well as forefoot and soft-responsive cushioning. Their simplistic look makes them easy to style and a great go-to sneaker.

“I think getting a plain color helps match with anything and makes them very easy to wear,” Scafani said, “They are really comfortable and the leather allows them to always look new as long as you clean them.”

Air Force 1’s in mens and women go for around $90 on Nike, $80 for big kids, $62 for little kids, and $48 in toddler sizes. Plain white isn’t the only color these come in; the Nike Air Force 1 ‘07’s can be bought in both all black and all red. Although the ‘07 version of Air Forces are best-selling, there are hundreds of variations of the shoe including different designs, colorways, collabs between brands and celebrities, and customs. These kicks can be found in almost every store or website that sells sneakers.

Some more of their popular shoes include Nike Air Maxes, Nike Blazers, and their large collection of running shoes.

While Nike is the largest footwear company in the world, that doesn’t mean cool shoes can’t be found elsewhere.

Adidas is ranked number 3 for largest footwear companies in the world, behind Nike and Jordan Brand.

The Adidas Superstars were originally designed to be a basketball shoe in the late ’60s, but once released, they became more popular within urban hip-hop culture and then blew up in mainstream culture. This shoe comes in both a low and high version and includes styles with a variety of materials and colors. The original and most popular build is the white shoe with black stripes, selling in mens and womens for $85, $70 in youth, $55 in little kids, and $45 in toddlers.

Adidas Forums were released in 1983 and worn by Jordan in the ‘84 in Team USA Olympic Trials prior to the creation of his world-famous shoe brand. These shoes are spreading in popularity, and new colors are still being released today. They have a velcro feature in addition to laces, making for a one-of-a-kind look. This shoe also features the iconic three-stripe Adidas logo, and are available in low, mid, and high-top versions.

On the more expensive end of Adidas shoes are Adidas Ultraboosts. Released in 2015, they were the first high-performance running shoes that became as popular within streetwear style as they were in the running world. These come in a number of colors, and the original model sells for $180. However, there are models with different materials and features that you can get at higher price points.

Plenty of people are invested in the shoe industry; sneaker fanatics, nicknamed “sneakerheads”, are continually involved in buying, reselling, and collecting new and throwback shoes.

Some of these sneakerheads are even making a living out of it.