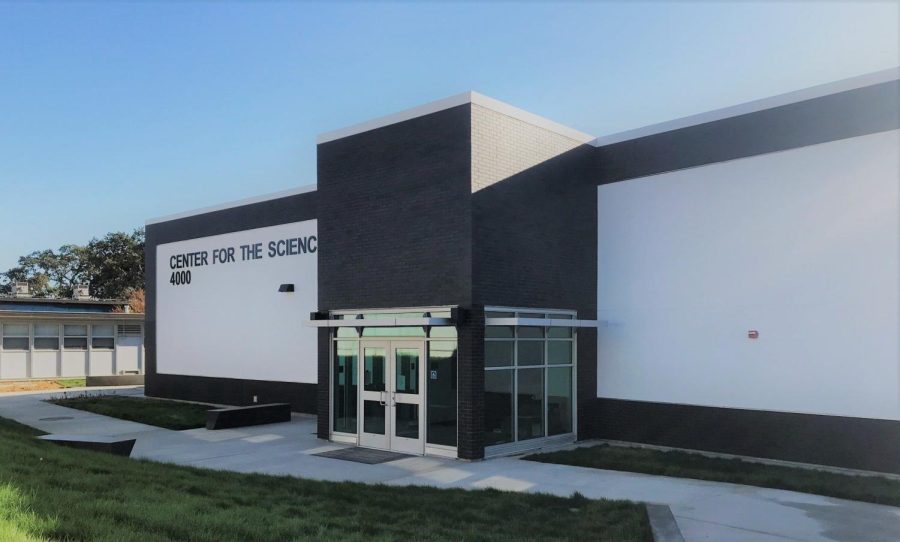 The new Center for the Sciences building.

The new Center for the Sciences is finally open for business. This building on the Novato High campus houses 10 labs/classrooms, a demonstration area, breakout spaces, and staff support space. Extensive new lab materials were installed in the building along with folding glass classroom partitions, skylights, and large sectional doors, similar to garage doors that allow access to outdoor learning areas.

The design and construction was planned for 14 months, officially beginning in August of 2019. The construction was completed last November, and became available for students last January, with COVID restrictions in place.

According to NUSD Executive Director of Facilities Mike Woolard, the main motive that led the school to start planning the new science building in 2016 was to remove the nine portable classrooms that used to hold most of the math classes and to provide 10 permanent lecture-lab classrooms for students to utilize for improved science classes.

After the completion of the science building, the construction team renovated the old science classrooms in wings 3000, 3100, and 3400, removing chemistry tables and sinks, and adding new floors and paint. Many math classes now occupy this space.

The most exciting part about the new building is the new technology and materials that it provides, including air conditioning and charging ports for the students.

“The whiteboard walls are getting a lot of use,” said Hank Seeley, a Novato High physics teacher. “I love having it near students so I can quickly draw pictures for individual students. Students also get to use them as alternatives to posters.”

The lecture classes in the science building were smartly designed to create a comfortable learning environment for the teachers and students, providing accessible spaces for studying and completing experiments, both inside and outside of the classroom.

Although the outdoor space is meant for students to work on their science projects, that space can quickly get crowded during the class periods and break.

“Usually what tends to happen is a lot of people stay in that building, especially during lunch and break,” said senior Chloe Germen. “So, if you want to study, there’s not a lot of room since people are taking up the tables. I just feel like it’s such a small hallway to hold that many people.”

The building was equipped with charging ports at each desk, making it easy for students to charge their Chromebooks without having to sit on the floor or to use their phones for assignments. As useful as the charging ports have been, they have proven to be somewhat dangerous if not handled with care. They have already damaged two lights in Mr. Marweg’s classroom, leading teachers to ask students to ask for help before handling them in order to avoid damaging any classroom property.

With the recent “devious licks” trend going around, the school decided to shut down the bathrooms in the new building. Many students have been complaining about how the nice new bathrooms in the Science Center are not available.

“The bathrooms were so nice,” said sophomore Chloe Crowder. “But now that both those and the ones in the field are closed, there are only two girls’ bathrooms, so there’s always so many lines.”

Germen also discussed the issue with the bathrooms.

“Now I feel that I’m always so late for class waiting in line to go to the bathroom. A lot of the old bathrooms, I can’t even close the door. I have to hold the door with my hand, it just makes it so uncomfortable,” she said.

Although many students are impacted by the closure of the bathrooms, there’s still no specific information if they’ll be available for the students any time soon. Many expect it to be closed until the end of the year.

The new science building has already been considered a success by the majority and has created a comfortable environment for learning.