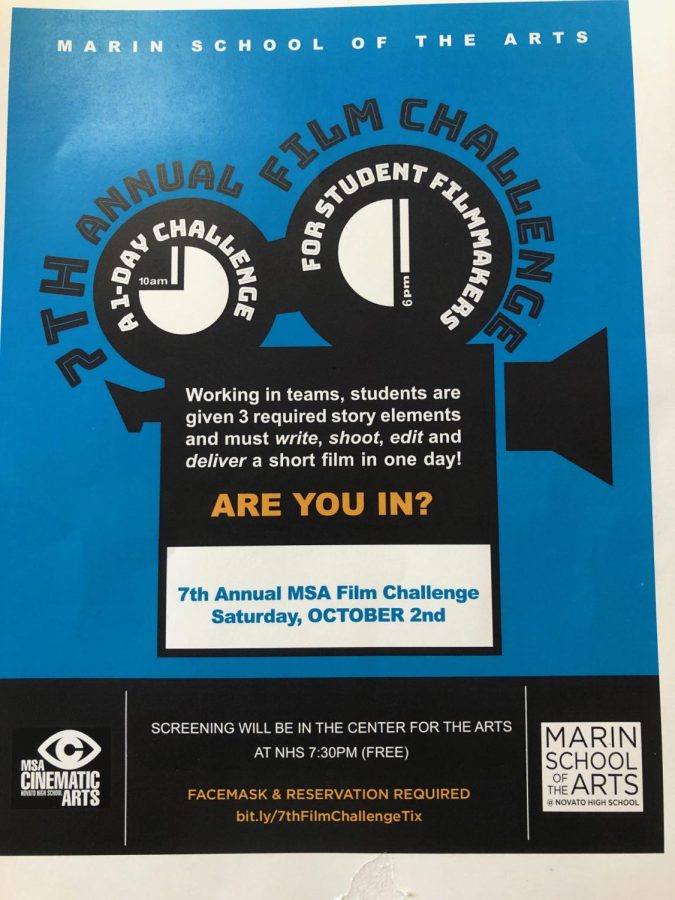 Flyer for the film challenge.

Marin School of the Arts affords countless unique opportunities for its students, but few are as singularly exciting as the annual Film Challenge hosted by the MSA Cinematic Arts program. Participating students, who can be from any MSA discipline or none at all, are given one day to create a four-minute short film that includes a few certain elements. This year, 11 groups created entertaining, individual films–and yes, I was in one of those eleven.
I can only fully attest to my own experience with the challenge, which was mostly positive. I worked with a group of friends and we attempted to make a short film in which the main character, played by MSA theater student Aakash Valdivia, sees his doppelganger.
This required special effects to be done in post-production, but that turned out to be the least of our troubles. When we had wrapped shooting, we realized there were countless issues with continuity, lighting, and other aspects of the film. We went to do reshoots, which took longer than they were worth, ultimately leaving us little time for editing. This meant there were issues with the sound, including one shot in which you could hear the crew joking around in the background of what was supposed to be a creepy scene.
As we approached the time limit, we decided to live with what we had. Later that day, the short films were shown in the new Center for the Arts. When ours came up, my whole group was nearly shaking with nerves. As the movie started playing, we realized the first half of the film had been cut out. Due to some sort of formatting issue, the first 2 minutes of the short were gone. Despite this feeling like a catastrophe, the overall experience was still positive.
The winning film, Chicken Trauma Drama, was a funny and well-crafted piece of absurdism. As I was filming my own short, I occasionally caught a glimpse of a person in a giant inflatable chicken suit running around dramatically, and wondered what was going on in that movie. It turned out to be great; it was surprisingly well-acted, with the best ending of the night.
Freshman Shelby Wise, who was a member of the winning group and the wearer of the chicken suit, spoke about her experience.
“I think it’s always hard to work in groups on creative projects, but I feel like my group did a pretty good job working together and were able to be productive while having fun,” she said.
Wise’s comments are a great reminder that sometimes the challenges we face in creative projects are often part of what makes them fun.
“It’s a crazy zoo, and everyone’s trying to rush and panic and make a masterpiece with limited resources…and it’s fun!” said MSA Cinematic Arts teacher and organizer of the challenge, Philip Chidel.
His description is apt. As all the teams attempted to edit together their films, the frantic buzz of the room reminded me of how I picture the 80’s New York Stock Exchange. People are leaning over each other and shouting, trying to make sure their input is heard. It’s a chaotic scene, but it’s quite a bit of fun to be in the middle of it.
Overall, it seems that all students and staff involved had a positive experience with the challenge. I know I did, despite my group’s issues. Some filmmakers had other issues that I can’t personally relate to, though. According to Wise, of the Chicken Trauma Drama group: “It was really hot in the chicken suit, it got up to 90 degrees that day, but there was a little fan in there to blow up the suit, so it wasn’t that bad, and it was definitely worth it.”