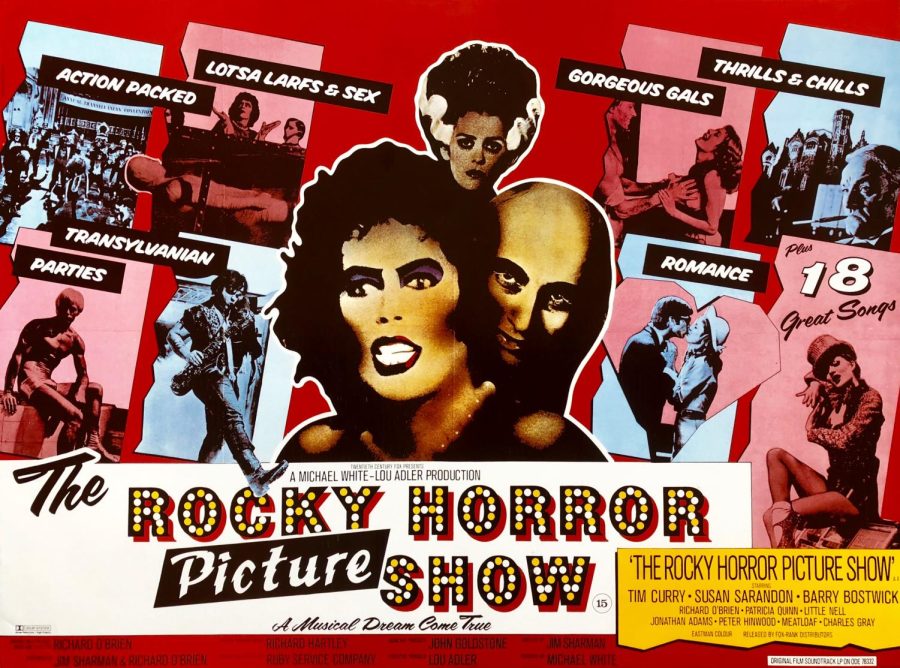 The Rocky Horror Picture Show was one of the boldest, influential films of the 70s, and the fan base still thrives today. There are performances of the show all throughout the world, especially around the Halloween season. On October 2, a few friends and I went to see the show at The Phoenix in Petaluma (for me it was my first time), and it was absolutely incredible.

The thrilling musical stars Tim Curry as Frank n Furter, a cross-dressing mad scientist, with the sole intention of creating the perfect man. However, two newly-engaged squares, Brad and Janet, stumble across Frank n Furter’s castle after their car breaks down in the rain. The rest of the movie follows their story as they find themselves in many new and uncomfortable situations.

“The show is an icon of queer culture and fantastic representation for gender identities outside the binary. It not only recognizes, but celebrates queer sexuality. Rocky Horror really lets it go wild. The show itself was fantastic, an absolute teen movie moment. The live cast was diverse and very talented,” said Novato High junior Simone Scheuer.

For my first time at The Phoenix, I was pleasantly surprised by the venue. It was more spacious than I thought it would be, which was good considering it was almost completely packed with people. The audience was somehow very energetic even though it was 12 a.m. My anxiety kept me from sitting closer than five rows from the stage, for fear of being called up to do something in front of everyone. Yet, I regret not sitting closer after having seen it.

Christine Champion, a crew and cast member with the Barely Legal Acting Group, was one of the performers when we saw the show.

“I went to see a midnight showing for the first time when I was 17, and I fell in love with how fun, zany and creative it was, so I got involved immediately; I’ve been involved for 11 years now,” Champion said. “For me, I love the sense of community and all of the different people you get to meet while traveling. I think it’s helped me to be a better leader and to be able to help others find direction or find a place where they feel like they belong. My favorite part is performing, especially as Columbia or as a Transylvanian. There’s nothing more satisfying than doing something you love and having it go exactly the way you wanted, and seeing that the audience really enjoyed it and are having just as much fun as you are.”

She also described how COVID has affected their performances.

“It’s the longest we’ve gone without performing in 25 years as far as I’m aware. It was really difficult to not see this group of people, as well as not being able to have that creative outlet to perform. A lot of us found it was a struggle, and realized Rocky was something that really helped our mental health, and helped us connect with each other and other people,” Champion said.

There were so many aspects of the experience that truly made it unforgettable. Everyone dressed up and they distributed props to the crowd before the show. Something about the show instilled confidence in the audience, which likely contributed to the actors’ incredible performances. The two actors who played Frank n Furter were extremely dynamic and interacted well with their castmates. Every time they came on stage or changed into a new costume, the audience went crazy, giving them the ego boost they needed to play such radiant characters.

The whole atmosphere at the Phoenix was super positive, and I think I’ve truly fallen in love with the show and its fanbase. I’m not a super big theater person (anymore), but I listen to the soundtrack almost daily. Each song carries such a bold message, creating a powerful listening experience.

One of the most memorable parts of the night for me was during the “Time Warp” song. Any Rocky Horror fan knows that there’s a specific dance that goes along with that number, and if you don’t know it, you’re proclaimed a “Rocky Horror Virgin”. The whole audience got up and did the dance along with the movie and the shadow cast. I genuinely have never been so excited about dancing with complete strangers.

Rocky Horror is so special to anyone who has the opportunity to enjoy it, whether that’s live, or just by watching the movie. The community behind the show is one of the most accepting groups of people I’ve ever seen, and they truly just want to make you feel like you belong.