The Perils of Addictive Social Media 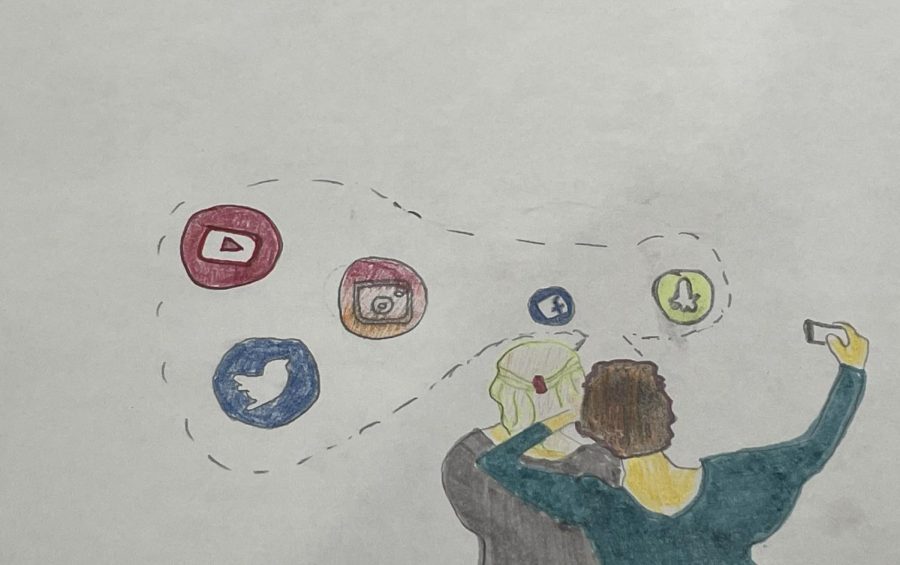 Social media has evolved into a dangerous and addictive source for influencing the younger generation. Understanding this evolution is important for today’s teens.

Social media was originally designed to electronically communicate with others at your fingertips. It was intended to facilitate various ways to keep in touch with relatives and friends, as well as to connect with individuals with common interests and engage in virtual networking.

A recent study by Datareporta measuring the usage of apps; Instagram, Snapchat, Facebook, and TikTok found that 4.48 billion active profiles have engaged in content throughout the month of July 2021. Skewing upwards, new consumers are gradually adapting to the change of receiving current information that has been developed and published in apps where those demographics range from a variety of spectrums. While the media has inherited prominent aspects that have helped launch trending topics and careers, the untold truth lies beneath the surface.

Generation Z gravitates towards Snapchat, an application that is used to send snaps (which are videos and pictures). It also has features such as filters that constantly change and the snap map where you can see your friends´ location if they aren’t on ghost mode.

¨I feel like nobody texts anymore. Talking to someone is just sending photos of your face back and forth now. That´s so stupid,¨ she said.

While conversing with others through the app, users have the ability to switch the settings and make chats last only 24 hours before they disappear unlike text messages, which are permanent.

Wesley Bartling, a Novato High senior, voiced his perception of the progress of Snapchat.

¨I think Snapchat kinda makes people not really get the social skills that they had back before Snapchat existed a few years ago,¨ he said.

FOMO (fear of missing out) has always been an element of social media. The thoughts that flood your head with the idea that you are missing out on hangouts or parties can trigger anxiety and negatively impact self-esteem. This can fuel increased social media use and even compel people to prioritize an increased amount of screen interaction.

¨It has affected me negatively,” she said. “I´ll see my friends hanging out and I won’t be invited and that’s the worst feeling.¨

Scrolling through your Instagram feed and swiping through stories becomes an addictive task, often creating the lingering curiosity of what others are doing. The majority of users share highlight reels of their life in the hopes of appealing to society. These people rarely show the hardships that they are going through.

A Novato High junior, McCabe Christian, voiced her thoughts upon the negative effects of social media.

“It makes it almost more difficult to be busy, to not be friends with that one person, or to not have that crazy expensive celebrity life,” she said.

In addition to using these apps and incorporating them into our lives, the idea of how we are perceived soars into the sky. Beauty is navigated through lenses in the media world as it has continued to evolve into a deeper imprint on how we see ourselves. Universal beauty is navigated through adopted lenses. Mainstream beauty standards can cause people to develop an eye that sees dissatisfaction in their appearance with a microscope that zooms in on perceived flaws. This can transform into a toxic environment that negatively affects individuals.

Social media users are exposed to unrealistic standards of what is considered good enough.

Content by influencers and posts from your mutuals are often being manipulated with facetune and filters, which can cause followers to develop eating disorders if they want to emulate what they see.

¨By setting unrealistic expectations, it damages our mental health and makes us internalize a lot of self-hatred towards ourselves,¨ said Novato High senior Olivia Bleth.

¨It creates different perspectives for people. It gives people the mentality that you have to be better than them. But in the end, no one’s perfect,” he said.

A Novato High senior summed up the discouraging aspect of being addicted to the many social media apps.