The Chewing Tobacco Culture of Baseball 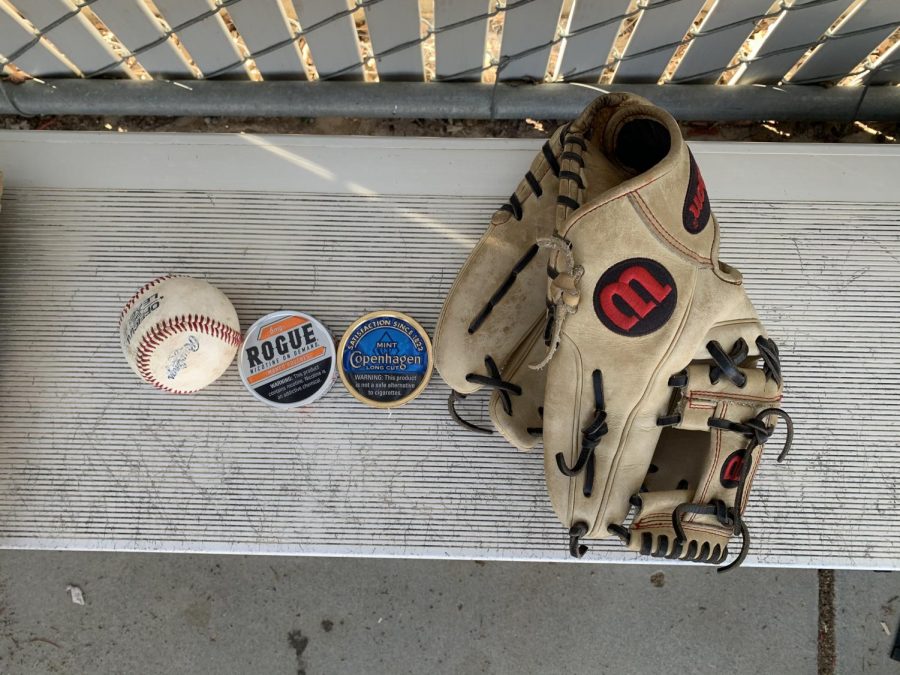 A baseball glove, a baseball, and two cans of chewing tobacco.

Baseball is here, and with it comes the usual joys of long summer days and hot dogs fresh off the grill. But if you were to look closely at games, you would see another time-honored tradition among the players with the use of chewing tobacco.

Whether you call it chew, chaw, dip, or any other name, chewing tobacco is as interwoven into the culture of baseball as rosin bags and chalked lines.

Baseball, perhaps more than any other sport, makes young athletes want to imitate their idols in the Major Leagues. It is easy for players to copy the swings and stances of their favorite Major Leaguer, and attempt to emulate them on the field. These same kids who want to be just like the pros see chewing tobacco as part of the game and are immediately drawn to it.

Novato High senior and baseball player Jake Tirk shared his views on this.

“Growing up, one of my favorite players would go up the plate, and his lip would be massive,” Tirk Said. “As soon as I got to Little League, I thought ‘I want to be like him.’”

Of course, no Little League player is using chew, but there are substitutes. Sunflower seeds and bubble gum are readily available, and could potentially condition young players for the later use of chewing tobacco.

“When kids were spitting seeds back in the day, they were imitating their favorite players,” Tirk said . “But they aren’t getting enough of a feeling out of it.”

Even if baseball players decide not to use chewing tobacco later in their careers, there are no current movements for the full-time ban of chew. The most obvious reason for this is because plenty of players have become accustomed to chewing tobacco in the sport of baseball. No one does a double-take if a can is left in the open, and players don’t shy away from discussing their favorite brands on the field. Simply put, players spend so much time chewing tobacco that many feel it actually is a part of the game itself.

Baseball is also full of traditions. From not stepping on the foul lines to not discussing an ongoing no-hitter, the traditions are passed down from one player to the next. Among these is the use of chewing tobacco.

An anonymous student described the process.

“All the old generations all chew,” the source said. “And they just get the younger generation to chew. It just repeats year after year, the older guys getting the younger guys and so on and so forth.”

It isn’t just tradition that keeps chewing tobacco so closely connected to the sport of baseball. The game can be boring, with long stretches of time in between the action. It is easy for players to lose focus, and the simple stimulation that chewing tobacco provides is enough of a reason for many.

A second anonymous source shared his views on this topic and provided some logic behind baseball’s tobacco addiction.