Do Today’s Teens Have it Harder or Easier Than Past Generations? 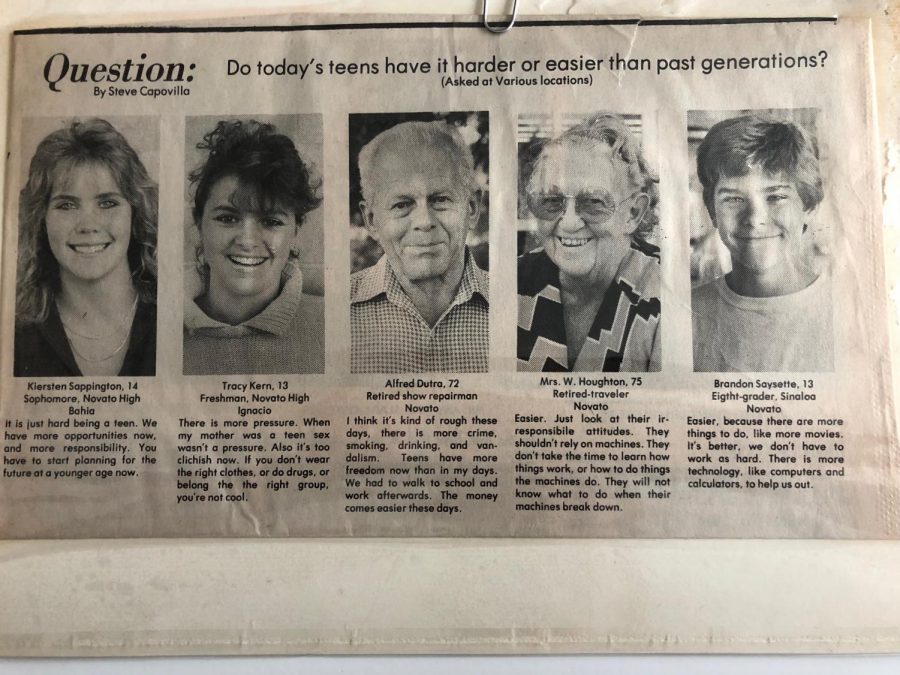 Many people question if teens have it harder or easier than previous generations. A 1987 issue of the Novato Advance explored this same question with 5 Novato citizens. When the same people were asked that exact question 34 years later, it’s interesting to see how their thoughts have changed. It’s also important to hear what current teens have to say about this.

“Harder,” Tracey Mandelbrot (formerly Tracey Kern) said. “With social media, teens are exposed to way too much. There is also more academic and athletic pressure than we had in the 80’s.”

“I believe teens currently have it tougher than past generations. Recently, I’ve seen more obstacles restricting one’s access to one’s desires. Access to natural lands, unnecessary rules and a price tag on everything seems to be the norm these days,” Saysette said. “I’ve also seen a tremendous change on the way parents raise their teens, me being one of them. Often, too much parenting can make an adolescent’s upbringing difficult.”

“Today’s generation has it harder than past generations,” Kiersten Ross said, when comparing the current generation to those of the past. “There is more school pressure to get good grades and high expectations to do well in sports. And social media has contributed to higher anxiety and depression among teens.”

The three students that were interviewed still live locally, and all have kids who attend NUSD schools.

Trent Saysette, a sophomore at Novato High School, responded to the same question.

“I think teens now have it easier because technology is making it so much easier to do things like school and stuff,” Saysette said.

He elaborated on the technological advancements of online shopping that allow for quicker and easier access to food and clothes.

“It makes it easier because the technology helps us with ordering stuff online so you don’t have to drive to go get it and instead it could be delivered to your house.”

“I personally believe that kids nowadays have it harder than kids did back then,” Mandelbrot said. “Kids now have much more pressure with school and social media than before.”

Personally, it seems that teens of this generation have it more difficult than those of past generations. The constant need to check for new electronic messages, see the latest social media posts, or mindlessly scroll through never-ending pits of content are all factors of this generation’s addiction to their devices. The fake and filtered perfection displayed by influencers and celebrities creates a false reality that many young people feel the need to follow.

Our generation suffers from increased stress, anxiety, depression, and suicide rates that were not as high for past teen generations.

“The proportion of 15/16 year olds reporting that they frequently feel anxious or depressed has doubled in the last 30 years from 1 in 30 to 2 in 30 for boys and 1 in 10 to 2 in ten for girls,” said the Nuffield Foundation, a group that strives to improve social well-being by contributing to research in science and social science.

Generations up until now have never had to deal with anything like this. In addition to social media, teens today are put under more pressure to get into top-ranked colleges and know what career path they want to pursue as high schoolers.