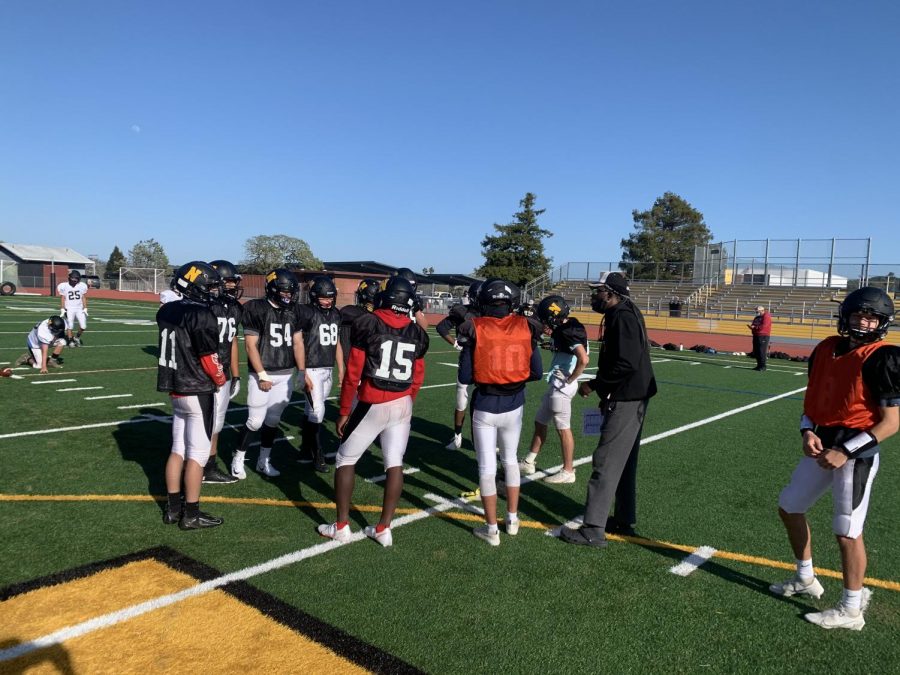 In a season that is expected to be full of changes and surprises, the Novato High varsity football team has added another fold into the mix.

It was announced to players that a new head coach would be taking over the reins this season. The news comes following the most successful season in the last four years, in which the team went 5-5 and snapped a 19-game losing streak going back two seasons. The architect of that season was Rich Torres, a coach with strong ties to winning and Novato football. Taking his place is Amil Hall, an assistant coach last season who played for the school in the 80’s. His expectation for the season is simple.

Even though Hall is set to be head coach for this season, Torres has not completely stepped away from the program. He said before the first official practice of the season that he aims to be there for practices, but will have to miss the weekend games.

Hall spent last season with the team, primarily spending time with the offense and increasing his players strength in the weight room. His long history of football includes playing for the University of Oregon, as well as playing professionally overseas in Europe.  He simply wants players to buy in and believe in themselves, something that he stressed last season.

“Novato pride, believe in one another, bleed black and gold, be proud of what you represent,” Hall said.

Even though Hall has more than a decade of coaching experience, this season will present many unique challenges that Hall has never faced in his long career. When asked what the biggest challenge will be, Hall is certain it will be the lack of preparation caused by Covid-19.

“Easily the amount of time we have to prepare to play a game,” Hall said. “Football is the most complex and involved sport on the planet and the virus has really altered everything we do.”

In years past, football practices would begin the week after school ended, utilizing all the time between June and August to get ready to play football. Covid-19 has forced the team to squeeze months of preparation into just a couple weeks.

Senior running back Jonaven Hill doesn’t see any issue that the change of command could have.

“We’ve been around coach Hall for over a year now and he’s a great coach,” Hill said.

Even though a new coach is calling the shots during games, players are as confident it won’t cause any problems. Senior defensive end Aidan Black weighed in.

“I don’t see any challenges that could arise, because I have the utmost trust in our coaching staff and I know they will have us prepared to play,” Black said.

For the Hornets, it was a solid start to the season, as they shut out Drake 13-0 this past Saturday.