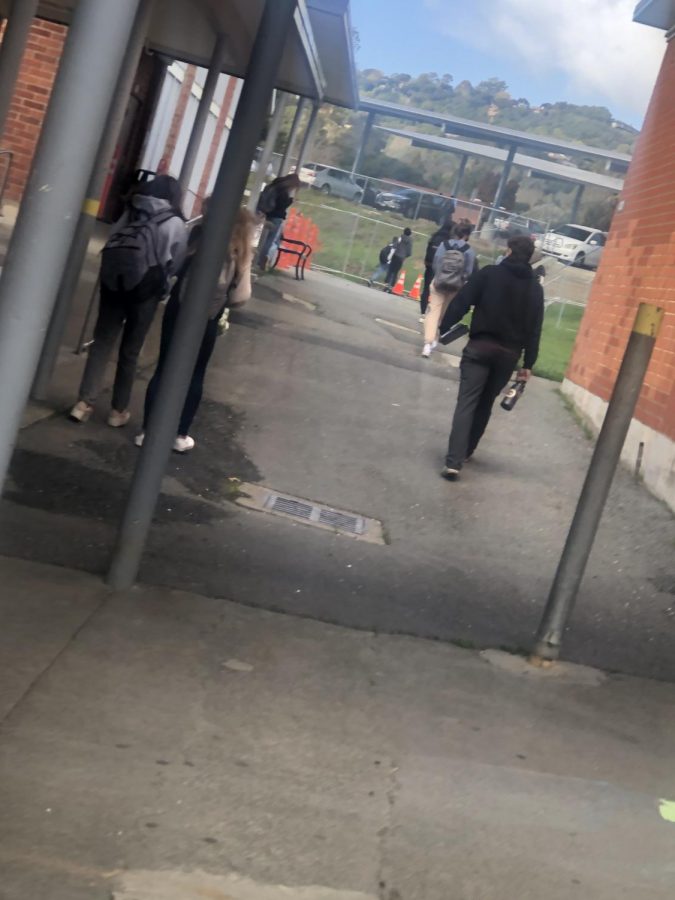 While Novato High students returned to campus for hybrid learning in early March, many families have been concerned with how Novato High will ensure everyone stays safe. Some students and parents have wondered about the protocols that have been put into place.

The decision to remain fully online or move to a hybrid learning environment has been an easy choice to make for some families, but not so easy for others. Many students and parents have voiced their opinions on the importance of returning to campus for hybrid learning or the option to remain entirely online.

As the school makes the changes to go back to on-campus learning, many worries have surrounded the mask mandate on campus. Some people were not sure that mandatory mask rules would be appropriately followed by all.

“Essentially we will ask that student to put a mask on and if they are unwilling to do that, they need to get off campus and learn from home,” Larson said.

If a student isn’t willing to comply with not only the school rule of a mask mandate but also the state law, that student will be told to leave campus. Wearing the mask properly is a huge aspect of a safe return. Making sure masks are fully covering noses and mouths could be tough to regulate. The same protocol goes for not wearing a mask correctly; the student will be asked to fix the mask, and if they do not listen, they will also be asked to leave campus.

“We are not suspending kids. It isn’t about consequences, it’s about following the state laws,” he said.

If you happen to forget a mask either at home or elsewhere, masks are available in the front office or in teachers’ classrooms.

At Novato High, there are areas on campus where large groups often gather, such as the quad, the lawns, and the bathrooms. With everyone expected to be keeping a distance, this was another concern. Enforcing social distancing could be a challenge.

Larson discussed groups gathering either before or after school.

“We are discouraging students from arriving earlier or staying late before or after school to keep those cohorts from intermingling,” he explained.

In addition to not encouraging before and after school gatherings, Larson also talked about gathering during the 10-minute break between the two daily periods.

“The ten-minute break is used as a time to get from one class to the other because it may take a while because of the hallways you are allowed to walk down,” he said, alluding to the new directional walkways.

For the bathrooms, Larson said that only three students should be in there at a time. Three students in the stalls is the limit, and other students can wait outside (or a campus supervisor will tell you to wait outside).

To make sure everyone is staying safe, socially distancing, wearing masks properly, and not walking the wrong way in the halls, Novato High’s entire staff, including teachers, campus supervisors, Officer Rodriguez, and all of the principals, must enforce the rules at all times.

“It’s the staff’s job to support students in making sure they are socially distant whether that be in the hallways or in the classroom.” Larson said.

Overall, Novato High administration doesn’t want students to stand around with other students or to resist the mask mandate. The consequences might not be harsh, but the overall goal is a safe return.