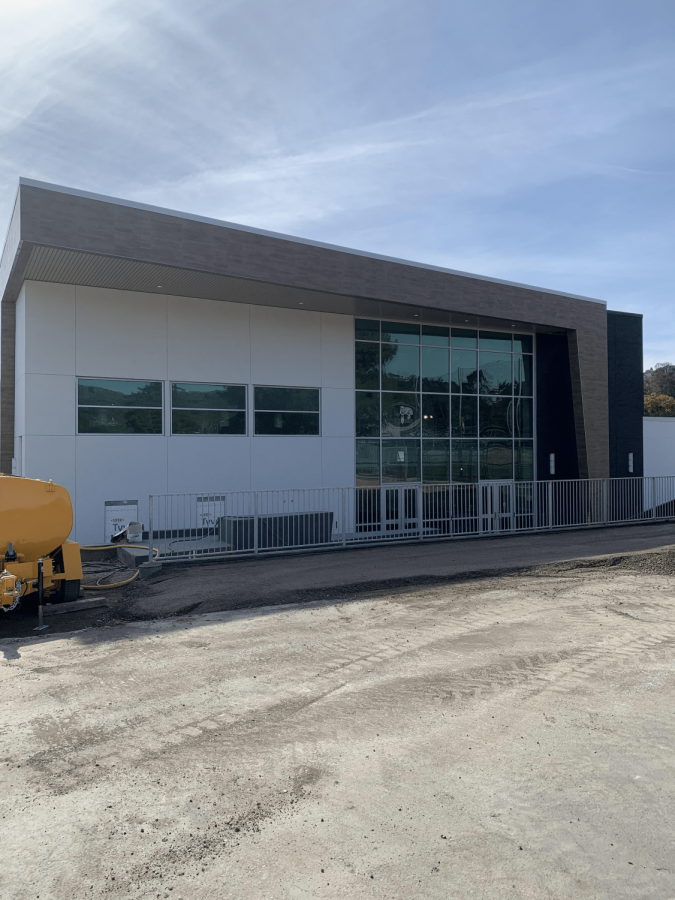 In what has been a long and exhausting construction process lasting almost two years, the new Center for the Arts building (previously known as the Performing Arts Center) is nearing completion. With the exterior of the building now fully constructed, the structure is currently undergoing significant installments on the interior. The Center for the Arts is set to be fully opened to the school by next fall and will serve as the main venue for all future performances by the Marin School of the Arts. MSA students can look forward to performing and spending time in this new, beautiful, state-of-the-art building for years to come.

The building is located near the front parking lot, in between the baseball field and the Old Gym, where the main tennis courts were previously located. This building is hard to miss, as it towers over nearly every other structure in its vicinity. Painted a fluorescent white with large windows in the front entrance, the building is extremely visually appealing as you enter. It contains a unique structure, as well as a silver outlining on the top and sides of the facade, giving the facility a very futuristic and modern look.

MSA Director and NHS Assistant Principal, Michelle Cortez, who played a vital role in designing the building, described the elements of the facility’s planned interior.

“When finished, the building will feature a 450-seat theatre with main level and balcony seating accessible by stairs that open into a killer view of the art gallery on the first floor and the huge windows in the front.  There is also a flexible space that can be used as either a classroom or a dressing room,” Cortez said.

The addition of this new building is a massive upgrade for the Marin School of the Arts, as they were previously crammed inside a very small and outdated performance venue, which only seated 140 people. The new Center for the Arts building is nearly 5 times larger than the old PAC, with a total of 42,000 square feet. Not only will there be a huge upgrade in size, but there will also be many aesthetic upgrades throughout the interior.

“The new Center for the Arts is state of the art with three times the capacity (of the old PAC).  MSA teachers had a ton of input on what we valued, so the builders made sure to include details that are important to us,” Cortez explained. “From small things like a built-in screen, which we can preview shows and cinematic arts clips, to huge investments like our instrumental music shell. These major upgrades will not only showcase the art we create, but it will also allow us to grow our technical and exhibition skills and share our work with a larger audience.”

The old Performing Arts Center will now be used as an everyday classroom by certain MSA classes, with performances taking place solely in the new Center for the Arts building.

“The old PAC will always have a sentimental place in our heart.  That space has served as our MSA performing arts stage for years. But we’ve outgrown its 140 seats on what was meant to be temporary risers.  We will need to reconfigure the PAC to more of a black box theatre and it will still serve as the MSA theatre daily classroom,” said Cortez.

Now in his third year of MSA theater, Novato High junior, Zach Lee, shared his thoughts on the new building and how he thinks it will benefit the theater program and  MSA as a whole.

“I am so excited to see how we implement the new building into our future productions. I believe that the new Center for the Arts will benefit the theatre discipline specifically in that we can host our everyday classes in our current PAC while being able to use the new building for rehearsals and shows,” said Lee. “In a way, the new building acts as an uniter in that all of our MSA programs will now have one showcase hall for performances and galleries, and it creates an even stronger communal feeling across our MSA family.”

The new performance venue will also benefit the entire Novato community. Other schools throughout the Novato Unified School District will be able to reserve the building for performances and events of their own. Other local youth groups and clubs can also be granted access to the facility.

If all goes as planned, the construction process of the Center for the Arts building should be complete within a few months. However, the building will most likely not be accessible to Novato High students and staff for this school year due to COVID safety protocols. Despite this restriction, MSA still plans to launch their “Showcase Comes Home” fundraiser on May 8th. This showcase will highlight all of the newly renovated buildings on campus for people to observe.

At each newly-renovated area, there will be a stage with live performances and showcasing. There will be a total of eight stages throughout the campus. The stairs just outside of the Center for the Arts building will serve as one of the eight stages.

With the addition of this new Center for the Arts building, as well as a new science building, and three brand new turfed sports fields, the Novato High campus is starting to look quite lively and fresh.