Skateboarders Endless Quest to Find the Best Areas: Turning the World into a Skate Park 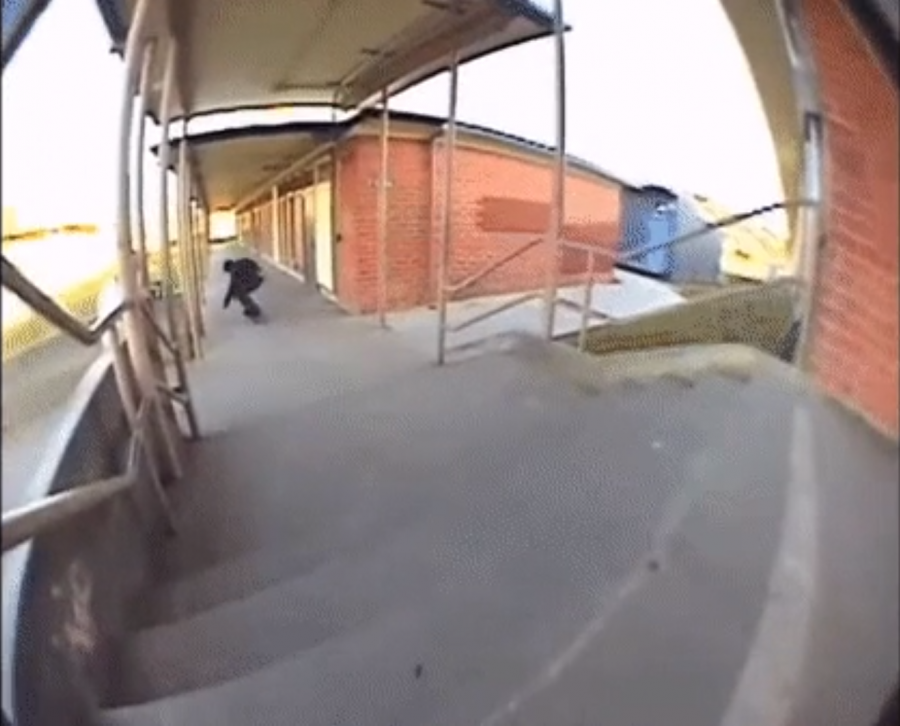 To many, Novato High is a sacred place of learning and growing. However, to a skateboarder, it is a place full of exhilarating potential. Specifically, the large double stair set by the 3500 Wing serves as a perfect structure for skaters. The staggering 10-stair gap has been skated by numerous professional skateboarders, and has become a desirable “spot” for skaters across Northern California.

To someone who doesn’t skateboard, these stairs like many others might appear to be a meaningless piece of concrete with no use other than to walk down and up. But to anyone who has been on a skateboard, it is viewed and interpreted much more differently.

First off, I should mention why a skateboarder is drawn to street skating, and skating places where it was never intended or even allowed.

There is no court. There is no field. There is definitely no 3 o’clock practice after school or college scouts to impress. This is what makes the sport so special. You need to go out and find things to skate, things that 20 years ago would not have seemed possible. Skateboarding, if you want to call it a sport, is like no other sport in the world. Even compared to its extreme sport counterparts, skateboarding is unique in so many different ways that separate it from the average world of recreation.

The more you fall down the skateboarding rabbit hole, the more you begin to see society differently. More things start to look skatable as you gain a natural eye for things to skate in urban areas.

“Why not just go to a skatepark?” My mom always questions.

For a lot of towns, skateparks are terrible or don’t exist. This forces skaters to venture beyond an empty parking lot and find the most vicious thing to skate or attempt the most vicious trick at that spot. There is a completely different feeling of skateboarding when it is done in the elements of society. Everything has to be perfect, from the weather to the time of day. The way you land on your board must be exact or else your board could break or get wheel bite on impact.

The creative side of skateboarding is being able to find unique obstacles around town and finding ways to skate them. The amount of different tricks that could happen at one spot is staggering. Skaters usually want to be the first person to do something down a stair set (a.k.a NBD or Never been done) in order to solidify their standing on a specific stair set, rail, or ledge.

When these places are found, skaters will go to drastic measures to get their tricks in. This means hopping fences, dodging cops, and even convincing random pedestrians that they are not in the right to harass you for skating on a curb. It’s moments like these that make landing a trick so much more special.

This aspect is relevant to the Novato High double set. Local skater Max Thomas described his experiences at this location.

“Sometimes the teachers don’t say anything and they will just call the cops,” Thomas said. “I never really had any teachers harass myself or my friends while skating the sets. There was one event where a teacher did lose control and grabbed my friend one day and did not let go of him until his dad showed up. That happened just roaming the school.”

California is notorious for being a skateboarding state. For some, there is even the dream of becoming a professional skateboarder. That has created a very competitive skateboarding environment on the West Coast. When a spot becomes popular, it makes it much more desirable for a hungry amateur skateboarder.

The Novato High double set could get demolished one day, but one thing won’t change and that’s the history. The footage will always remain. The memories are irreplaceable.  This NHS double stair set has brought people together and provided so much fun and friendship.

Skaters know that ordinary and inanimate objects can ultimately become appealing and special.