Movie Theaters and Industry Suffering Through the Covid Hit 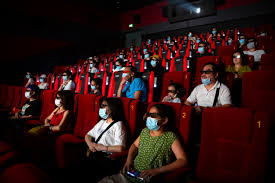 As the coronavirus pandemic has progressed over the course of the previous year, one thing has become abundantly clear: the film industry will never be the same. Many moviegoers miss the days when theaters were open to view the latest Hollywood blockbuster or lower-budget indie picture. Numerous theaters worry that they may be shuttered before the pandemic ends. Additionally, production companies have been scrambling to turn a profit despite their inability to sell tickets.

There have been attempts to release new movies into theaters, but they haven’t gone so well. When Christopher Nolan’s much-anticipated Tenet bombed at the box office, it seemed like a death knell for the movie industry. Many movie theaters are still open, primarily for private screenings that usually cost from $50 to $150. These, naturally, don’t rake in as much money as regular showings of films.

New movies are being made during the pandemic, but the results have been less than hopeful. The HBO Max original movie Locked Down was an uneven and boring stab at a heist movie set during the pandemic, and upcoming Netflix release Malcolm and Marie, starring Zendaya and John David Washington, is already receiving mixed reviews from critics. While some movies produced before the pandemic have garnered positive praise, there seems to be fewer and fewer good movies made as a result of COVID-19.

Film production companies themselves aren’t the only ones suffering. Theaters need to generate revenue to survive. Many appear to be in imminent danger of closing, or have already shut their doors indefinitely.

Moviegoers are also suffering. A major market suddenly vanishing from existence surely has had a major impact on the consumer. Additionally, renting out empty theaters is also not a viable option for everyone.

Sophomore Elijah Chandlee, when asked if he would consider that an option, told The Swarm, “Nah G, I’m broke.” When asked what movies he wished he could see, Chandlee said, “It hit me really hard when I heard I had to wait even longer to watch Croods 2: A New Age.”

He’s not the only one resenting the delay of certain movies.

Sophomore Sofia Casano said, “I”m upset about the Spider-Verse sequel and Last Night in Soho.” Both are movies that would certainly generate money, but sadly, they can’t be released in theaters to enthusiastic audiences.

Warner Bros. has attempted a new plan to benefit from their 2021 releases. The production and distribution giant struck a deal with HBO Max to stream all the films on their service for 31 days after their release. While this gives more people a chance to see the movies, it drew the ire of some due to its theater-killing potential. Critics noted that if people could see new releases on a streaming service, they would be unlikely to support theaters, even if they had been vaccinated or they could rent out a theater.

So, is this the death of theaters? AMC was barely saved from bankruptcy last month by some well-meaning day traders, but the stock is still low. Theaters will likely not have to close their doors permanently for some time, but if the pandemic is not under control soon, they almost certainly will suffer that fate. If there’s anything moviegoers can do to help them, it’s to assemble some people in your bubble to throw $100 together and rent out a theater. If that isn’t an option, as it isn’t for many people, the best you can do is hope.

As to not end this story on a depressing note, here are some recommendations of movies to fill the void left by the delayed movies you were most looking forward to.

No Time to Die: The newest James Bond movie–supposedly Daniel Craig’s final outing as 007–has been delayed. Instead, watch 2007’s Hot Fuzz, a British action-comedy. If you’re thinking, “Shouldn’t I just watch the earlier Bond movies?” hold that thought. In the meantime remember that Hot Fuzz is a delightful and violently funny movie directed by Scott Pilgrim Vs. The World’s Edgar Wright. Speaking of whom…

Last Night in Soho: Edgar Wright’s London-set psychological thriller is shrouded in mystery, meaning it’s hard to know what movies will be similar. The movie will follow a young woman who has aspirations in the fashion industry. Another great psychological thriller film about a woman who wants to achieve success in a glamorous industry is David Lynch’s Mulholland Drive from 2001. It’s hard to say anything else without ruining the fun. Watch it for yourself.

Black Widow: Anyone who watches movies knows what this is–the latest entry in the Marvel Cinematic Universe, led by Scarlett Johanson’s assassin-turned-superhero. Here’s where it comes back to James Bond. 007 movies place spy action in the framing of a large franchise like nothing else. Well, aside from the Mission: Impossible movies, which are just as good. So if you’ve already plowed through a 24-film DVD set of Bond, try the latter franchise.

If nothing else, hopefully this article serves as preparation for the new world of movie-watching, where theaters are less important than home releases and new good movies are less than common.