A Deep Dive into Novato, the History and the Name 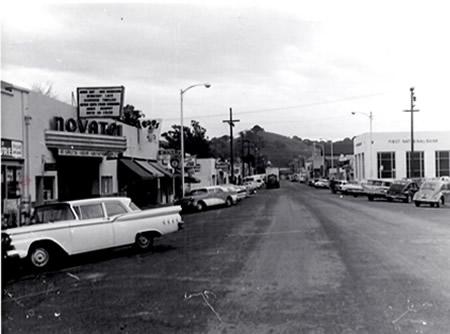 Novato, the last bastion of Marin County before one crosses over into Sonoma County and the rolling vineyards beyond, might just be the most boring town in the Bay Area, with little to do for anyone under the age of 65. However, the history of the city is far from dull.

Most of the town’s history is known, yet one of the greatest mysteries to this day includes the origin of the name Novato. Historians are still perplexed by this. Treasurer of the Novato Historical Guild Kathryn Hansen weighed in.

“They’re actually not sure,” said Hansen.

While the name of Novato may be a mystery to many, its history was well documented by the members of the Novato Historical Guild and private citizens that grew up in the area.

There are a number of theories to how our city got its name. One theory believes the name to be related to a Coast Miwok Chief who took St. Novatus’s name after being baptized. Another theory points to a Spanish Officer named Ygnacio Martinez who captured Indian outlaw Canada de Novato in the modern day location of Novato. The theory being he named the place after the infamous outlaw. Regardless, landowner and military officer Fernando Feliz was granted a large swath of land which he named Rancho de Novato in 1839.

Prior to the 1848 Treaty of Guadalupe-Hidalgo, Novato was a frontier land part of Mexico. Much of the land, once owned by Missions, was sold to private landowners who owned large tracts of land for ranching and farming. These landowners included names like Pacheco, Ynita, Atherton, and Delong.

Once the United States military took over in 1848, Mexican landowners had to prove they owned their land by registering their deeds up in San Francisco. One of these landowners included the charismatic Ignacio Pacheco who had to not only protect his land, but also his valuable herd of horses from the U.S. military.

Pacheco owned a large swath of land starting in modern day Ignacio and spanning all the way to the ocean near Tomales Bay. When famed tracker Kit Carson and the U.S. Cavalry came for his horses and land, he had hid all of his horses up North on his other ranch, and had already struck a deal with lawmakers in San Francisco, permanently securing his land.

Another landowner was Camilo Ynita, the son of the last coastal Miwok chief who was granted a large ranch in modern day Olompali State Park. While many Native Americans had left the area in search of work due to displacement by missions and the United States government, Ynita remained.

“[he was] a fine, intelligent man…punctual in meeting his obligations and…highly esteemed by all of us,” said Wiliam Heath Davis, a resident of Novato when Ynita was granted Rancho Olompali in 1843.

Olompali has a lot of modern history, which is equally noteworthy. The Grateful Dead owned the place at one point, hosting large shows for fans and friends alike, even burning down the original farm house on a wild night of partying.

Back in the day, the town of Novato itself was not a place to take your children. Hansen provided valuable information on the origin and timeline of Novato.

“It was like a cowboy town really,” said Hansen.

Apart from the large ranches and farms, many of the residents included a small group of town people, ranch hands, and bums from trains around town. Grant Avenue was loaded with saloons prior to the expansion of Novato.

Beside the many ne’er-do-wells that came to Novato, large immigrant groups also flocked to the area for opportunities in ranching and farming.

Surprisingly, Novato is home to a larger population of Portugese immigrants than other parts of Marin. One sign of this is Novato’s Portugese ethnic center downtown.

“Why they were so successful is because they were dairymen from the Azores, not Portugal,” said Hansen.

This small ethnic group from rocky islands off the coast of Portugal made their home in Novato as successful dairymen and farmers, contributing vast amounts of food to urban centers in San Francisco. Big industry names include Delong and Sweetser, who at one point in Novato’s history, owned the largest apple orchards in the world, supplying China with pippin apples.

“The big push really came in the early 1960’s, the baby boomers who all grew up in San Francisco couldn’t afford San Francisco,” said Hansen.

This trend continues today with many people choosing to live in Novato for lower property costs and a suburban environment, while commuting to San Francisco for work. For many, Novato also offered a more attractive spread-out location, as opposed to the urban environment of San Francisco.

Another interesting Novato factoid is its inclusion to Marin County. Novato, if zoned with any real thought, should’ve been part of Sonoma County.

“Whoever designed counties didn’t know anything about this area, and just cut it up without realizing Novato really should be part of Sonoma County,” said Hansen.

During winter, horses couldn’t make it over the hills towards the rest of Marin because of muddy conditions.

“We were always a satellite of Petaluma,” Hansen said.

Whether Novato truly belongs with Sonoma or Marin doesn’t really matter in this modern age. Most of us citizens of Novato feel attached to our city, whether we like it or not.

“It’s familiar, it’s something I can rely on. It’s a place I feel I can get around in without having any stress or anxiety,” said former Novato High student Lewis Carrington.

Carrington, a Novato native, calls Black Point his home along with many other young people his age who grew up in this town.

Novato may be an incredibly dull and uneventful place for many students and young people, but it has a rich history that is often overlooked. The town was a place for those who wanted to seize the American dream in one of the most naturally beautiful places in the world.

While I may not live in Novato as I grow older, its rolling hills and oak dotted landscape will always be close to my heart.