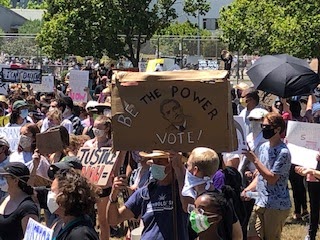 At 1:30 p.m. on June 1st, nearly 1,000 individuals gathered in Marin City’s Gateway Shopping Center for a march against police brutality and racial injustice. Different than the previous marches and protests across Marin County, this protest was predominantly black, and entirely run by the black community of Marin City. The event remained peaceful, however the community was fed up with injustice across America and in their own county.

At the start of the protest, the main group of protesters gathered in the Gateway Shopping Center just off of Highway 101 and began an organized march toward a community center. Stevie Lee, a longtime member and leader of the Marin City community, had a number of insightful comments.

Lee went on to explain how the Marin City community was given help through job training in menial labor and new cheap housing, but the people in the community were never given a solid way out into a better lifestyle. Furthermore, the lack of integration into surrounding Marin communities also posed a huge problem. Marin County is less than 4% black, but Marin City is nearly 98% black. It’s very clear to both residents and outsiders that segregation is implemented even in our own county.

“The change Marin County needs to make, and it’s a big change, is the fear of black people,” said Lee.

Lee’s concerns are extremely valid and backed up by events and comments surrounding the protest both before and after.

The Tiburon Police Chief, Michael Cronin, issued a statement prior to the protest alerting the occupants of Marin County to avoid Marin City due to possible violent rioting and protests. They furthermore explained how they would be bolstering their ranks. Although the protest was maintained entirely peacefully, there was quite a bit of anger directed towards Cronin, his department, and police as a whole.

“We are here because America, this racist system of oppression and capitalism, must now be dismantled,” said Barry Accius.

Accius, an outspoken leader and small business owner from Sacramento who grew up in Marin City, gave an impassioned speech for the crowd to hear. After his segment, it was clear that the community had had enough and their deeply entrenched, long-standing anger was on display.

Regardless, Accius promoted peaceful protest but made it clear that both the black community and himself were done with police brutality and racism locally and nationally.

The Marin City community wants to find common ground and peace with police and the rest of the county despite past wrongdoings. Paul Austin, a main coordinator of the event discussed the possibility of repair between the community and the police.

“There needs to be stability here, so that means the captains can’t rotate every three years, you can’t build relationships when people are always moving,” Austin said.

The group of officers assigned specifically to Marin City are transferred every three years, resulting in a lack of communication and relationship-building between the community and the police department. This causes more tension and results in more anger and frustration with county police.

Not only were adults leading, speaking, and coordinating the event, but students also played a major part. Many female students that grew up or currently live in the Marin City area were heavily involved in the planning and execution of the event throughout the day. One person in particular, Ayana Morgan Woodard, seemed to be the face of the younger generation.

“I want to see more black-owned businesses, I want more of us owning more of what we have here. I want change by us through business, through the economy, through all of these systematic ways,” said Woodard.

Woodard, a top-performing 4.0 graduate of Tuskegee University, believes in reform through education for her community and open forum discussion between the younger and older generation in order to right the wrongs of the past.

Once the march came to stop and different community leaders and individuals gave speeches, including Woodard and Austin, the event was nearly over. While there was an increasing police presence throughout the march and event, there were zero altercations.

Some individuals took it upon themselves to antagonize officers around the scene, however these individuals were young white people (who had been previously seen at the Terra Linda protest by this reporter).