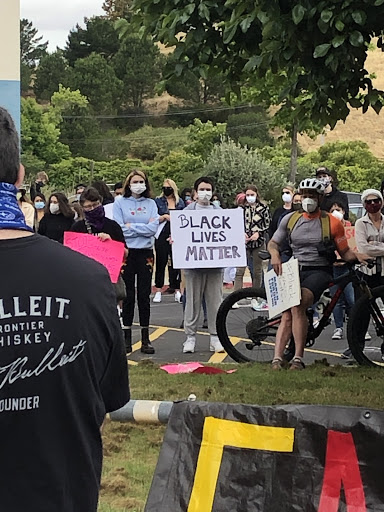 At 12:00 p.m. on May 31st, supporters of the Black Lives Matter movement gathered by Terra Linda High School to march and speak out against police brutality, racial inequality, and the injustice surrounding the murder of George Floyd. The crowd consisted of students from various racial backgrounds. While many marched with purpose and resolve, there was a hint of disappointment in the air by the end of the day.

As people gathered, the organizers of the march gave fiery and powerful speeches against police brutality and racial injustice. Many spoke of the racial divide in Marin County and how even such a liberal county is responsible for racial injustice and gentrification.

One of the speakers, Jane Casto, weighed in.

“Marin is very neo-liberal, in the sense that it will recognize that a problem occurs, but refuses to see it in their neighborhood,” Casto said.

Casto, a TL student who works for Marin Organizational for Racial Equity, believes that Marin is just as guilty as many other places in America that actively segregate their community by pushing out racial minorities into specific districts, both economically and socially driven.

“We have to look at the way our community is divided in the sense that there is a racial aspect of it and there is also an income aspect of it,” Casto said.

As many felt the same way that Casto did, there was one man in particular who felt differently about the protest.

An opposing protester who would only go by the name of “Nate” stood opposite from the marches on the other side of the street holding a Blue Lives Matter flag to protest against police hate.

“I’m here exercising my rights to peacefully protest, and I think this whole thing has got misconstrued because there are always bad eggs in every bucket, I understand that with cops….you don’t generalize that one person with the whole community,” Nate said.

While Nate stood with his flag on the other side of the street, some marchers yelled at him (and even myself for interviewing him). Some in the march stopped to yell and call him names as he stood peacefully protesting against the public looting and generalization of the police. However, through his use of the Blue Lives Matter flag, he definitely was there to garner a reaction, expecting a public pushback against him.

According to many protesters, the Blue Lives Matter flags are a symbol of hate and white supremacy that mocks the Black Lives Matter movement.

Nate does believe that George Floyd was murdered and feels that the cops involved were held accountable. However, he does not believe that hate should be reflected on all cops or any cops uninvolved.

As the protest continued around Northgate 1 and through residential areas, the protesters received support and kind words from people out on their porches and sidewalks. When the march came to a halt in front of Terra Linda High School, speeches began to erupt as before.

“I was really fed up with all the things I was seeing online, and it wasn’t enough to just donate and share my post,” Serpa said.

Serpa, who began the initial thread to start the protest in Terra Linda, believes in peaceful protesting in order to achieve racial equality. She wanted to give the people in her community a chance to stand up for what’s right and against what’s wrong.

“This is our chance to use our platform for the good; we no longer have to listen to the news from government programs,” Serpa said.

Serpa, along with many other protesters, expressed outrage at the way black protesters and activists have been portrayed in current media. They feel that it’s time to take back the real story and break public opinion of minority protestors as “thugs” and “rebels” without a cause.

Once the first few speeches hit the ears of the groups of protesters gathered at TL, many left the scene to go back to their cars and enjoy the rest of the day. Many of these people were the bulk of the crowd and were white, middle-aged and teenage individuals.

An anonymous female protester agreed to an interview after giving a speech addressing many of these concerns.

“I’m very disappointed to see that Marin is so fake progressive. We like to think that we are woke and that we are doing the work that needs to be done to help minorities, and that’s not the truth. It really felt like they were just doing this so that they could sleep at night,” the anonymous protester said.

As she continued to elaborate, it was clear that many of the protesters were there with a half-hearted approach to taking part in the event. The mood began to sour for many of the strong protesters and after the initial march.

“This neighborhood has always been very self-centered, very ignorant, and very privileged,” said the anonymous protester.

The protester continued to explain how she had been to Oakland protests, and had gone to Terra Linda High School. Clearly, Marin has had a racial inequity problem for quite a long time, and it has remained unaddressed.

“There is always going to be hope, but it’s how passionate and how willing you are to take initiative and be accountable,” said the anonymous protester.

As the speeches and protests came to a close, there was hope that the younger generation could persevere. The remaining protesters stood in solidarity until the event concluded. Most of the white, middle-aged men and women had departed.

Perhaps there is hope for police brutality to end and racial injustice to be addressed, but until then, the fight will continue.