The Benefits of Dogs in High School Classrooms 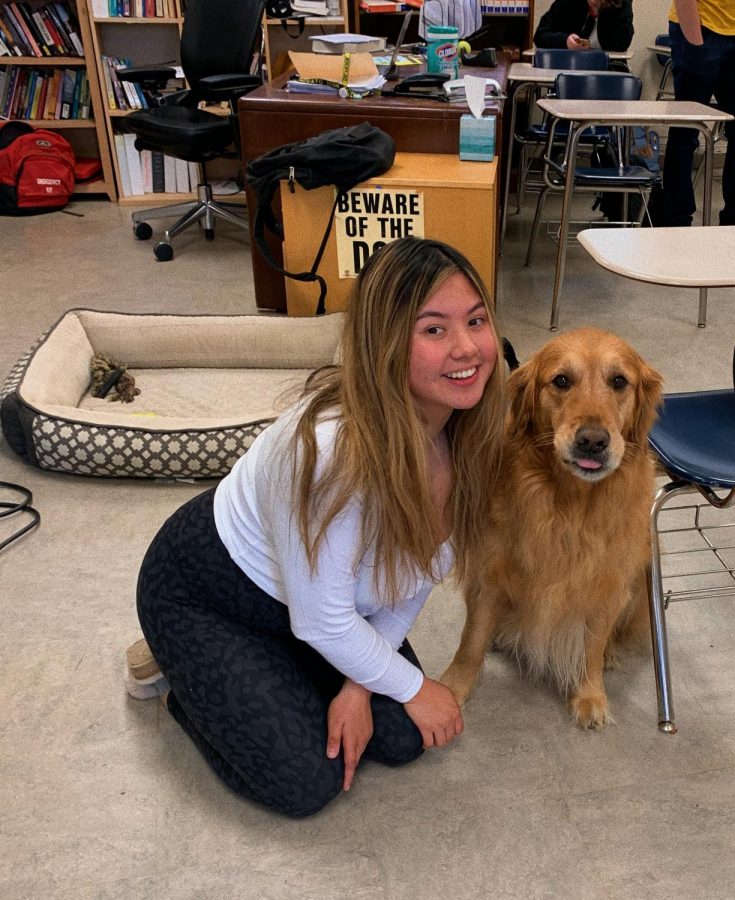 High school continues to be a stressful environment for many students, from academic reasons to social issues. Although students have tried various ways to cope, a new solution has entered the campus of Novato High School in the form of a four-legged animal.

Frank, the golden retriever, has frequently been a popular surprise in the classroom of social studies teacher Tim Mahoney. This year, Frank has become a dependable presence in room 2106.

Mahoney opened up on his reason for increasing Frank’s visits.

“On one random day, I felt totally bad and was already going through some personal trials in my life. I was wondering if I should call sick into work, then looked over to Frank. I took him on a nice walk and felt so much better. I then decided, ‘Frank, you’re coming to school with me’,” Mahoney said.

“It made me feel so good to have him there throughout the whole day in class. He’s only a distraction for a few minutes, but overall it’s clear the students benefit from his presence,” he said.

This is not just an opinion, it’s scientific.

According to The Bark, the connection between mothers and their babies in relation to dogs and their owners share a chemical called oxytocin, the love hormone. Human mothers who share a gaze with their babies receive higher levels of oxytocin. Mothers with higher oxytocin levels engage in more maternal behavior, which raises oxytocin levels in their babies. This leads babies to be more attached and attentive to their mothers, which increases mothers’ oxytocin levels. This creates a positive cycle.

Oxytocin levels also increase in mothers and babies who touch frequently, and decrease when they are prevented from touching. This is very similar to petting dogs; humans and dogs both experience an increase in oxytocin. Because dogs affect us and our oxytocin levels much the same as human babies do, the bond we have with our dogs can feel similar to the bond between mothers and their children.

Many of Mahoney’s students have expressed their appreciation of Frank’s visits.

“Usually most teachers start the lectures right away, where we start by hanging with Frank, which makes our days better,” said junior Brian Losey.

“Even though he rarely visited, I felt more focused when Frank was in the class. He definitely helped with my stress as well. Also, I had Mahoney seventh period and seeing Frank was always a nice surprise to end the day,” said Castillo.

Although some are curious about the consequences of bringing a dog to school, NHS principal Mark Brewer assured Frank’s visits were not a liability.

“Due to Frank’s training, he’s not a liability. As long as they’re trained, such as the therapy dogs we bring in during finals week in the library, there’s no problem,” said Brewer. “I’m a dog guy myself. I love dogs, and Frank being around for the students is positive. However, if a student brings their pet dog to campus, that is in fact a liability since those dogs aren’t trained to be in situations with many people so you never know how they’ll react.”

Additionally, there’s even a possibility of students with the condition cynophobia, a fear of canines. With Frank now visiting much more than previous years, students who have this condition may be stressed at campus or uncomfortable when he’s present (yet, there have not been any complaints).

Although Frank has a life of his own in his dog world with Mahoney, students at Novato High will always welcome Frank with open arms when he is on campus.