The Rise and Dominance of Swimmer Zach McIntyre 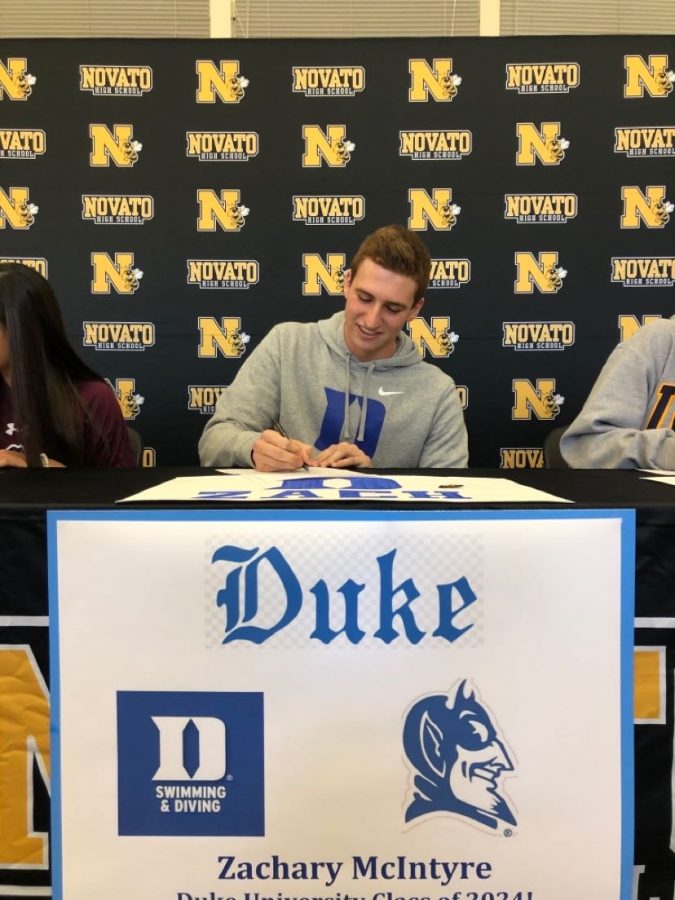 Winning four Marin County Athletic League titles and receiving interest from over forty NCAA programs is not the typical experience for a Novato High School athlete. But for senior swimmer Zach McIntyre, a long journey has led him to these accomplishments, developing him into one of the best high school swimmers in California.

McIntyre met the pool when he was four years-old, and hasn’t left since. He joined a year-round club team at age nine, where he developed advanced swim-skills for his age. However it wasn’t until high school that he found his niche: sprint and mid-distance freestyle, sprint backstroke, and sprint fly.

“I used to swim everything but soon realized I was really good at a few strokes,” said McIntyre. “I decided I was going to make the commitment and zone in on perfecting them.”

McIntyre’s times have shown that he is well in the conversation of competing in the Olympic trials, but he has alternative focuses.

“Olympics would be cool but have never been a goal of mine,” said McIntyre. “I just want to enjoy college and swimming, and keep making good memories from swim.”

McIntyre is currently .4 seconds away from qualifying for the Olympic trials in 50 meter free. If he does decide to pursue this path, he will have a chance to improve his times at Duke University, where he will swim for the next four years.

During McIntyre’s junior season, NCAA Division 1, 2 and 3 swim programs from all over the country reached out to McIntyre and showed interest. By the end of the school year, McIntyre narrowed it down to Harvard, Duke, and Northwestern. However, after an official visit to Duke, he knew he had found his new home.

“I loved everything about Duke,” said McIntyre. “The campus is beautiful, the people are friendly, and most importantly, it’s a really good school academically. It just felt right.”

“We are always searching for individuals who are interested in receiving a world-class education as well as athletic experience and Zach fits these two criteria,” said Colella. “He has great energy and will be a strong contributor not only as an individual but as a member of our sprint relays.  He has demonstrated great speed and with additional training we expect him to be able to compete at the highest level within both the ACC Conference and NCAA. We are really looking forward to Zach’s arrival in the fall of 2020.”

As for now, McIntyre will continue to dominate in the pool all spring for the Novato Swim team, and hopefully leave opponents in the distance.