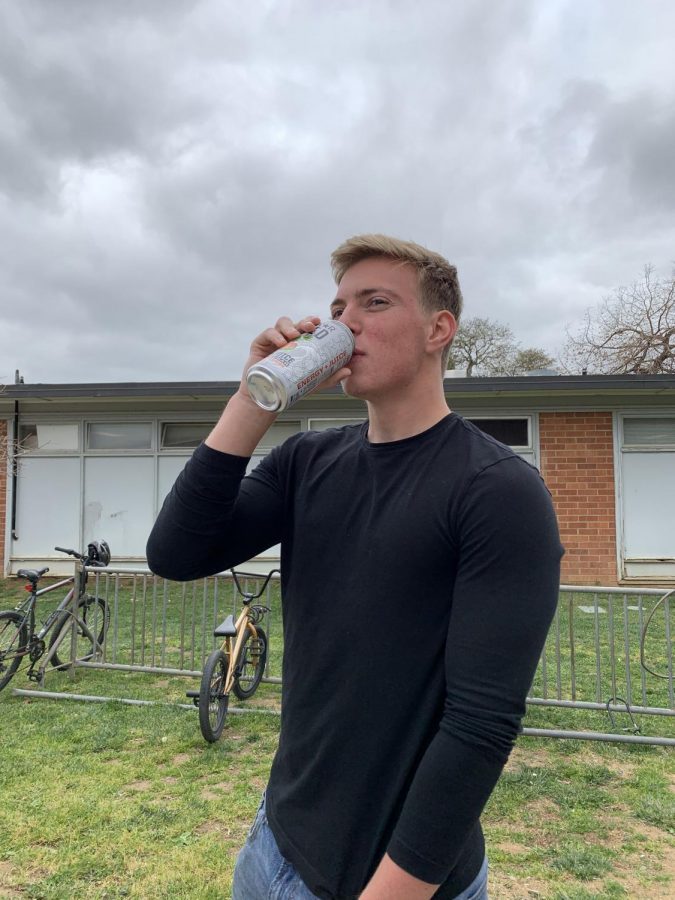 Caffeine, the most used drug in the world, has become a daily part of many teenager’s lives. Around campus, flashy aluminum cans sporting the Rockstar, Bang or many other logos, can be seen at all times of day. Teenagers consume caffeine at an alarming rate, specifically through the consumption of energy drinks, without knowing the risks nor the harmful substances within these drinks.

Because of the nature of caffeine, upon consuming it once, it starts a never-ending cycle of sleep deprivation if not regulated properly. Caffeine has a half-life of six hours, the amount of time it takes for the body to digest half the amount consumed. It affects levels of dopamine and adenosine, both of which are vital to getting good sleep. If a person drinks an energy drink containing 240 mg of caffeine (the amount in a usual energy drink) at noon, the effects won’t wear off until well after midnight.

This never-ending cycle is the leading cause of caffeine addiction. Once caffeine leaves the system, dopamine levels drop and thus energy drops. When that happens, more caffeine needs to be consumed or else a lethargic feeling can consume the body for the rest of the day.

“Recently I’ve been trying to keep under 200 [milligrams], but I guess more in the heyday, I could get up to anywhere between 400 and 600 but that’s pretty rare,” Funk said. “I really like Rockstar because they’re really cheap, besides that I really like Bang because I like to workout and it’s a good energy boost.”

The Food and Drug Administration (FDA) has released cautions surrounding caffeine, considering it is a drug, and Novato High junior Caleb Hute is aware of this fact.

“You’re not supposed to exceed 800 in a day, otherwise you risk heart failure,” Hute said. “I don’t think you’re supposed to have above 400 suggested, but habitual users can maintain that.”

Another problem surrounding caffeine is dependence. Users tend to start drinking energy drinks to keep them awake, but after consuming caffeine on a daily basis, they rely on it and it becomes a habit.

“I started [drinking caffeine] to keep myself awake, but now it’s kind of just a habit and I can’t break it because I can’t really wake up without it,” said Hute.

The ingredients on the back of these cans of energy drinks contain long words that a normal consumer might not be able to identify. Ingredients such as taurine or guarana haven’t had enough research done to discern if they have long-term detrimental effects.

“I do read the ingredients, I know that guarana is in the same family tree as the coffee bean. It’s just more caffeine-heavy, density wise,” Funk said. “I know that vitamin B-12 is good for energy, cell reproduction. Taurine, it’s like an energy booster; I know that it’s responsible for the one gram of protein in Red Bull.”

The ingredients aren’t the only thing to be worried about when consuming caffeine. There are some harsh side effects that occur when too much caffeine is ingested in a short period of time.

With all these harmful reactions to caffeine, and dependence upon it, there are steps to take to either become less addicted or find an alternative method of consumption. It is very hard to quit caffeine cold-turkey, thus one needs to wean themself off slowly, consuming less caffeine day by day, until they can function normally without caffeine.

However, because energy drinks contain so much caffeine, an alternative must be found. Three popular options are green tea, coffee and yerba mate. Green tea is a natural source of caffeine and is an easily moderated dosage. Coffee, although strong, is another natural, healthier option that can be controlled. Lastly, yerba mate, not the kind seen in cans, but loose leaf, can be a good source of caffeine and easily moderated.