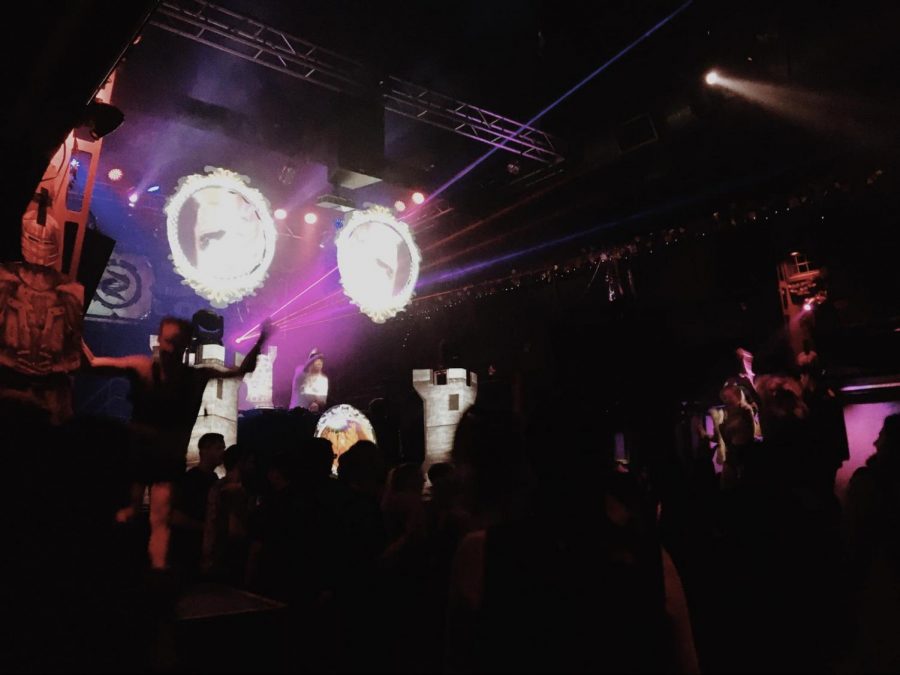 Nestled between the Mission and Financial Districts of San Francisco is the DNA lounge; a colorful and eccentric rave destination that draws in crowds of all people. The venue has been a part of San Francisco since 1985, and many Bay Area locals can recall their own DNA experiences while growing up in the area. The club was recently declared both “Best Dance Club” and “Best Live Music Venue” in the SF Weekly Readers’ Poll, and is recognized throughout the Bay Area as the go-to spot to celebrate and discover rave culture.

The venue draws in a large demographic of high school students, as they frequently host ‘all-age events’, often attracting Novato High students. During these events, students pack into carpools and head to San Francisco dressed in their flashiest outfits.

The lounge is made up of a large stage and dance floor, with a seating area upstairs, and is conveniently located next door to a pizzeria. Although all ages are permitted, the audience is made up of mostly 17 to 23 year-olds, with the older crowd in the clear minority.

Vibrant lights and fast-paced techno music characterize the room, and attendees are immediately thrown into sensory overload. Although incredibly intense, many people find comfort and exhilaration in this type of environment.

Jordan Hovey, an avid attendee of the DNA lounge, recounts her experiences there.

“In general, I have a lot of fun. It’s a place that I can use as an outlet. I can dress however I want, and I can dance with my friends and meet new people, which is something that’s hard to do in Marin County,” said Hovey, who understands the feeling of genuine enjoyment of a rave. “I honestly think it’s helped me a lot with being comfortable with who I am in my body. I’ve struggled in the past with self confidence and body issues, but I think the fact that everyone there is so loving, and I have such great friends who help me get out of my bubble has helped me have a good time. It’s made me a much more outgoing person, and someone who’s more confident in myself.”

One of the main draw factors to rave culture is the trance-like techno music that is played, usually DJ’d live at events. DNA features both local and traveling artists, and has specifically-themed music each night.

Former Novato High student Lukas Peters has been a frequent DJ and staff member for the DNA lounge. To describe his experience raving, he says “Raving is an incredibly communal experience once you get past the crazy outfits and even crazier music. People rave to enjoy music of all kinds in a super accepting environment. No matter who you are, what you like, how you dress, or why you rave, you are a part of a family.”

Peters moved on to UCLA following graduation, but still goes out of his way to celebrate rave culture and pursue his passion of performing. Peters described the feeling of performing for the rave scene.

“Getting to perform in front of tens or even hundreds of people is electrifying,” he said. “I have such a love for the music I play and having the opportunity to share that with an audience, even if it’s only for an hour, is such a gift. Music is such a positive and connecting force, so to see a crowd of people living in the moment, dancing their hearts out, makes me happy to be alive.”

Although raves may seem inviting from the outside, there is a lot going on inside that makes some audience members feel uncomfortable and often unsafe. Because raves are both sensory and visual experiences, many people choose to use substances such as MDMA (molly), LSD, psychedelic mushrooms, and alcohol.

The combination of lights, noise, substances, and body heat makes the vibe of DNA overly intense and off-putting for a lot of people. Those interested in attending raves should heavily consider the environment they are about to immerse themselves in before spending the $15-30 entry fee.

“I’ve heard experiences where people go and expect one thing, and it turns out to be something very different. I know that a lot of people have bad experiences on drugs there, because of the lights and sound,” he said. “There’s a stigma of people just going there to get messed up.”

Because raves can potentially turn into dangerous situations, it’s imperative for those attending to be prepared by arranging for a designated driver and going with people they trust will be of aid if anything goes wrong. Although rave culture can potentially be transformative for some, it is important to do a fair amount of research before stepping into it, and to make sure it is something you will find true enjoyment in.