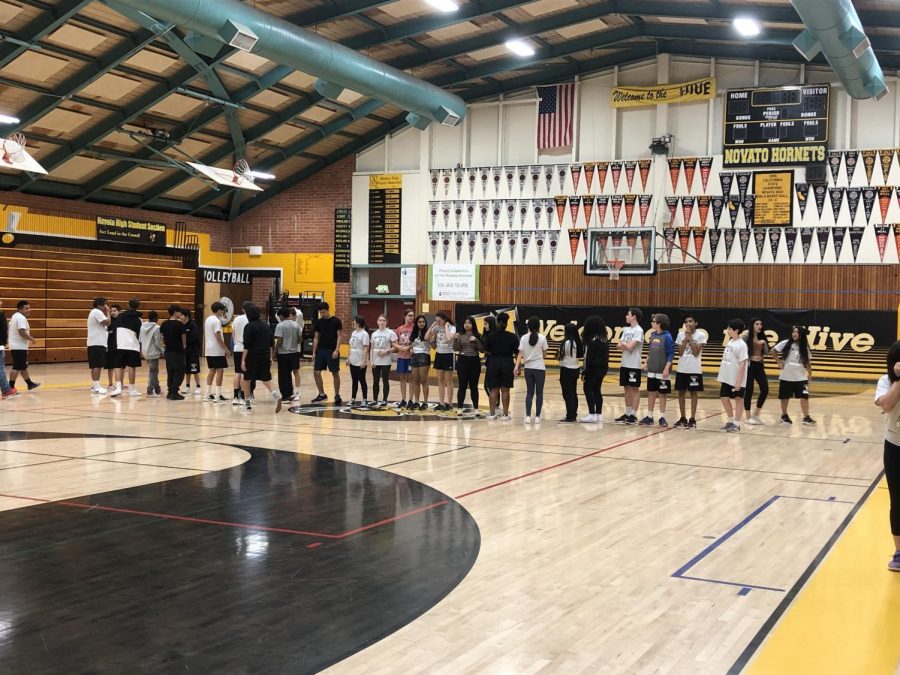 On the Novato High campus, these new changes in legislation could possibly change the dynamic of P.E. classes. Some Novato High P.E. teachers feel opposed to this new change, but the change may not do much to impact the actual P.E. curriculum. Bruce Ferrigno, longtime P.E. teacher, weighed in.

“It won’t,” Ferrigno said. “Some of the curriculum is based on the California physical fitness test, but for the most part it is just a guideline for feedback for improvement of one’s physical fitness and health.”

Perhaps with the measurement for student physical health success gone, a new one will just have to be implemented. If not, there could be some other concerns.

“It is estimated that the youth of America is two-thirds overweight and the obesity rate of our youth, like our adult population is only growing,” said Ferringo.

Physical health is as important as mental health and should be maintained and tested in public schools to understand the fitness of California’s youth.

Not only do the P.E. teachers have problems with the new legislation, but Novato High’s own Athletic Director Michelle Sanner also has some concerns.

“I am concerned that as an increasingly sedentary culture that removing benchmarks and measurable metrics for students health minimizes the importance of health in the public eye,” Sanner said.

Without a measurable score for students to gauge their personal physical health, there is not much beyond an A grade to keep them motivated to stay physically fit. With lower standards or even removing standards in order to feel better, we could be setting students up for an unhealthy lifestyle.

Along with P.E. teachers and administrators, those who are directly affected have mixed feelings. Much of Newsom’s new plan addressing fitness testing is to decrease body shaming and bullying. Some students may feel that fitness testing does contribute to some of these problems. Senior Frank Lookinland described his personal feelings.

“I think it’s kinda unnecessary, kids know how fit they are in general,” Lookinland said.

Certain aspects of the fitness tests, including the run, push-ups, and sit-ups, are basic benchmarks for physical fitness. However, parts like the BMI (Body Mass Index) test may cause more harm than good.

“Some kids don’t want to tell you their BMI, it probably makes a lot of kids feel bad,” Lookinland said.

A simple number to determine if one is at a healthy weight or not may contribute to much of the negative feelings surrounding the fitness test. All bodies are different, and some students may be able to pass the physical testing, but may not be able to pass their BMI. For some students, the fitness test is a mere speed bump on their road through high school. Freshman Jeremy Lindsey explained his view.

“In my opinion, ideally, it’s basically the same as middle school. I don’t really mind it to be honest,” Lindsey said.

Lindsey is currently enrolled in P.E. 1, and feels ambivalent toward the test. He simply sees it as a normal aspect of public school life.

“Me personally, I can do all the things,” Lindsey said.

Many students similar to Lindsey pass the fitness test during their freshman year and don’t see it as much of a problem. However, the Novato High student population is full of people with different bodies, fitness levels, and abilities. Some that are not as athletically-gifted might appreciate a change in the P.E. curriculum.

“I think eliminating it might be shortsighted, I think a revamp might be a better idea,” said Sanner.

Perhaps looking for an all-encompassing measure for students involved in P.E. classes might serve the population a lot better. It could address concerns regarding transgender students required to test at a gender level which they don’t identify with. Novato High could create a baseline test for all genders and abilities that measures actual physical growth and ability, rather than weight and an average ability.

“I think I’d be more interested in something that has measurable metric but less tied to weight, and more tied to ability and overall health,” said Sanner.

Tracking a student’s growth from the beginning to the end of the year could enhance overall student health and fitness. Child obesity is a constant problem in America, and it often continues into adulthood. Aside from fitness testing changes, many may be worried about the waivers system.

“We are looking at other options for the waiver system,” Sanner said.

A new option for the waiver system, and perhaps a different fitness test disconnected from the state may be the only changes. The real challenge is the possible lower standards for student’s fitness measurements. With increasing child and teen obesity there should be more hard physical testing. Instead of removing fitness testing, more students should be getting off the couch and into the gym.