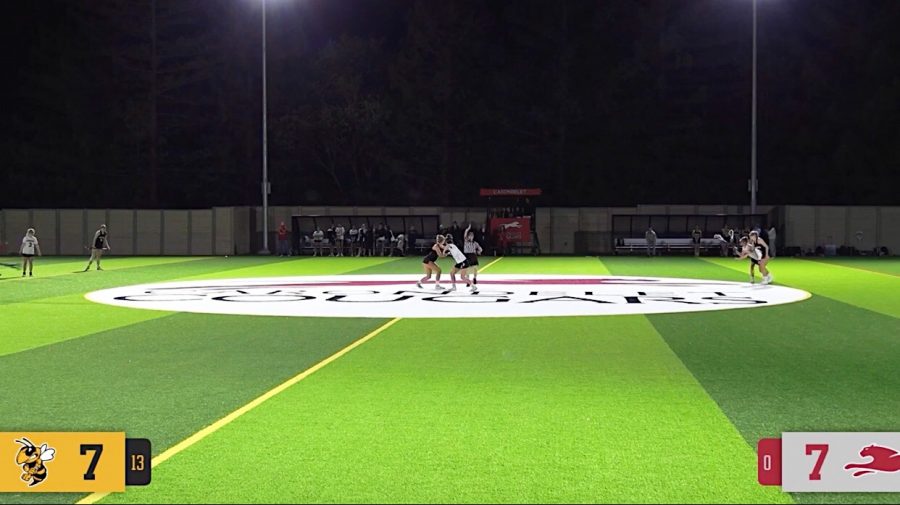 It comes as no surprise that the Novato High Girls lacrosse team is one of the most successful and well-known teams on campus. Over the last five years, these girls have worked hard to take home four NCS titles, three MCAL championships, as well as producing countless D-1 college athletes. However, this streak of dominance was devastatingly broken when Redwood took last year’s MCAL title game by one goal. The team lost quite a few high-scoring seniors from last year which creates some mystery heading into this season.

The pressure is high for this year’s lacrosse team. As captain Hailee Seehusen puts it, “We have nothing to lose and everything to gain.”

Pre-season training began months in advance to get the players in shape and form a bond that will hopefully carry over onto the field. After a week of strenuous tryouts, the teams were chosen. The varsity team trains every weekday from 3:30 until dark, attempting to make sure the plays are close to perfect. These girls also wake up bright and early for Saturday’s two-hour field practice, followed by an hour of swimming led by Novato High’s swim coach, Denise McIntyre.

On February 22nd, the team visited Davis Senior High School, where they participated in a small tournament against some of the best teams around. This tournament consisted of four 25-minute games, with no breaks or score-count.

Novato went head-to-head with San Ramon Valley for the first time since last year’s grueling 21-9 loss. The team performed well, showcasing their talents and sizing up the competition.

Senior Samantha Rapp discussed her thoughts about the current season.

“I think that we have a really good chance at MCAL’s. The new team dynamic is looking really good. Despite having a lot of new players, I think that this year we are really going to work on building a lacrosse family and learn how to work together,” Rapp said. “Last year we struggled with a bit of authority, having a new coach and all, so I think having coaches that most of us play club for will really contribute to the game. We definitely have a shot at winning.”

Although the team is led by its players, it would be foolish to say that nobody else contributes. Not only does Novato High have a supportive parent group, but the team would be nowhere without its coaches. Scott Sullivan and Dave Picardi have coached the JV team for the past couple of years. They have decided to take on a new role for the 2020 season. Sullivan and Picardi know what it takes to maintain Novato’s proud heritage of success on the lacrosse fields. Both have years of experience in the sport, one having coached for over eight years, the other being a former state champion.

On March 3rd, Novato fell to Carondelet 15-10 in a very close lead with many lead changes. Despite the loss, the coaches encouraged the girls to remain positive. Midfielders Lauren Picardi (junior) and Emma Clark (senior) have been impactful on and off the field. The two are both committed to play college lacrosse, along with star defender Katie Sullivan (junior). Seehusen, a defender, is also largely influential to those around her. A true captain, she takes her role seriously. Her teammates can always count on her to keep their spirits high. Ultimately, the team is only as successful as their goalie, Pascale de Buren (junior). Pascale has shown tremendous strength, taking on the most difficult position on the field.

Hopefully the leadership and high hopes will translate to wins for the Hornets.