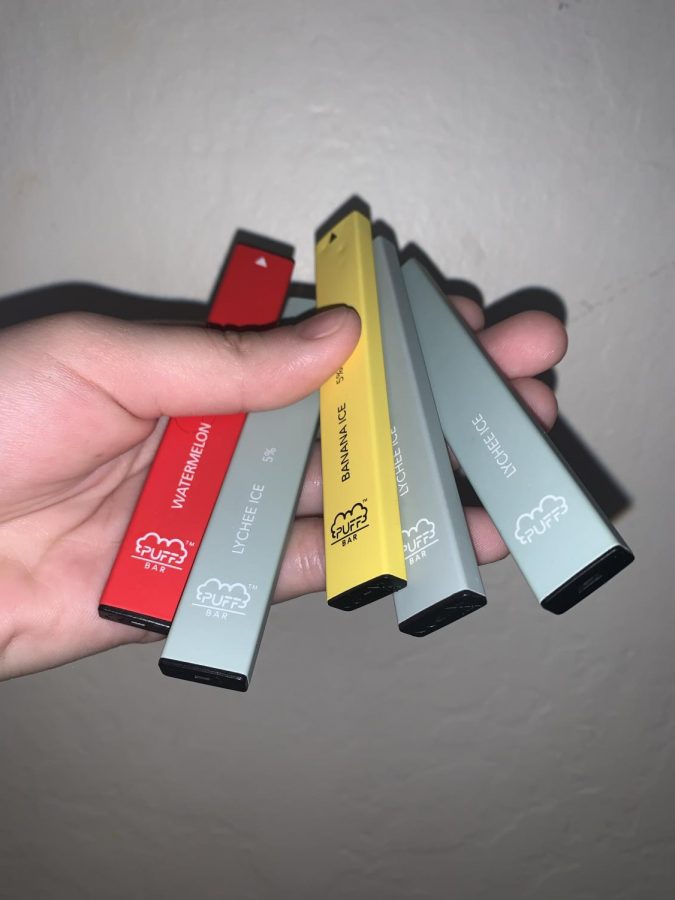 As Juul use continues to fade amongst teenagers, primarily due to their lack of accessibility, a new nicotine device known as the “Puff Bar” has been gaining traction over the past few months among this age group.

A Puff Bar is a disposable vape device intended to aid smokers in the process of quitting the habit. This product retails for about $10, and has been manufactured and sold through the company “Puff E-Cig” since 2011. The brand mirrors Juul, in that both devices are slick and compact, available in a variety of flavors, and contain about 50 mg of nicotine.

In October of 2019, Juul announced it’s online removal of flavored pods such as mango, cucumber, and other fruit. The company also temporarily halted sales of these pod flavors in stores.

Because the flavors were a huge pull factor drawing the younger demographic into purchasing from Juul, many teenagers were turned off by the remaining selection, which included Virginia tobacco, classic tobacco, and menthol. Despite the product plummeting, the nicotine addictions have remained.

This directly fed into the craze over Puff Bars, which many believe to be a knockoff of Juul. Nonetheless, it is still effective in reaching the desired light-headed feeling.

“I started with a Juul, but Puff Bars are cheaper, and I like the buzz more. I’m definitely addicted, and I can go through one in two days,” they said.

Puff Bars have been shockingly easy for students to obtain. They are sold online, as well as in most convenience stores, which makes them accessible to students with fake identification cards or from someone older willing to buy up for them. But it doesn’t stop there. A lot of students have methods of purchasing bulk amounts of Puff Bars and then reselling them to others.

Another anonymous student at Novato High with a reasonably successful Puff Bar resale business explained his methods. They get their stock from older colleagues willing to resell to them at market price. The student sells to about 25 people via their Snapchat account, and each Puff Bar is resold for $15, which amounts to a profit of $5 per device.

Although this student has a massive supply of vaping devices, they personally choose not to use them, stating “I don’t use puff bars, and never plan to smoke anything with nicotine.”

When asked if they were aware of the dangers caused by Puff Bar usage, the student replied “I totally am, there’s a reason I don’t do it. I sort of feel bad selling to people I personally know, because I’m like ‘I can’t believe this person went down this path’ but then again, if they don’t get it from me, they will easily find someone else.”

“Students in America aren’t really into smoking cigarettes,” she said. “When I was on a cruise ship in New Zealand, my friend from Spain smoked cigarettes all the time, and we look down upon that. Everyone juuls and uses Puff Bars. I saw the different flavors, they make them look really appealing to high schoolers.”

According to the website Los Angeleno, there have been over 880 vaping-related lung injury cases reported in the US, and over a dozen deaths. There has also been controversy over the security and quality of Puff Bars specifically. Many users claim that no two Puff Bars are the same size, and the company’s methods of manufacturing the product do not meet adequate standards.

Despite the mixed feelings regarding Puff Bars, they are still extremely popular among students, and a hot topic of conversation. Becoming educated about vaping is vital, as the dangerous effects are becoming more apparent.