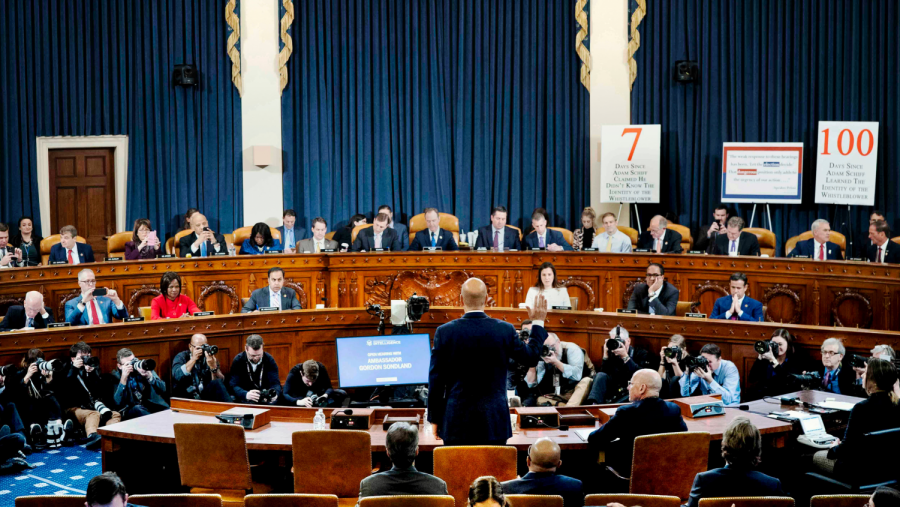 The complaint was about a phone call that Trump had with the President of Ukraine Volodymr Zelensky.  Trump asked for Zelensky to launch an investigation into Joe Biden, his son Hunter Biden, and the Ukrainian gas company Burisma in exchange for military aid. This would be classified as a “quid pro quo” which is a favor or advantage granted or expected in return for something. This is considered a bribe and an abuse of power, which are both illegal. The White House went on to release the transcript of the phone call in which Trump told Zelensky “I would like you to do us a favor though,” after Zelensky said, “We are ready to buy more Javelins.”

This isn’t the first time Trump has been caught up in a scandal during his presidency, he was investigated by Robert Muller about Russia interference in the 2016 election which led to ten counts of obstruction of justice. Many of Trump’s closest people are facing prison sentences such as his campaign manager Roger Stone, who has been charged on all seven charges that he faced including lying to congress, witness tampering, and obstruction of justice. All of the crimes that Trump’s staff have committed combined with the Mueller report were not enough for Speaker of the House Nancy Pelosi to launch an impeachment inquiry until this Ukraine scandal, which prompted Pelosi and the rest of the House of Representatives to vote on launching an impeachment inquiry.

With the inquiry now underway, The House Intelligence Committee recently questioned key witnesses involved with the Trump phone call to Ukraine, to get clear evidence of any wrong doings. These public hearings have been nationally televised for the American public to see.

During former U.S ambassador to Ukraine Marie Yovanovitch’s testimony, Trump attacked her on Twitter. House Intelligence Committee Chairman Adam Schiff read Trump’s tweet to Yovanovitch during her live testimony and asked for her reaction. Viewers saw in real time as she responded, saying that it was “very intimidating.” Trump on live television committed witness intimidation which could add to his article of impeachment.

“I know that members of this committee frequently frame these complicated issues in the form of a simple question: Was there a ‘quid pro quo’?” Sondland said. “With regard to the requested White House call and the White House meeting, the answer is yes.” That wasn’t the only major thing Sondland testified to. “Everyone was in the loop,” said Sondland, including Vice President Mike Pence, Mike Pompeo, Mick Mulvaney and others. Mulvaney actually already admitted to a quid pro quo on live TV.

These aren’t the only impeachment hearings taking place. The House Judiciary Committee started holding their own hearings on December 4th. The first witnesses to testify are four legal scholars who were invited by Democrats to give their own opinion on if Trump’s actions are impeachable, resulting in three of the four professors saying that his actions are an impeachable abuse of power.

With Democrats releasing the articles of impeachment being abuse of power and obstruction of Congress, both parties are very divided and with the Republicans holding the majority of the senate, it is unlikely that Trump will be removed from office.