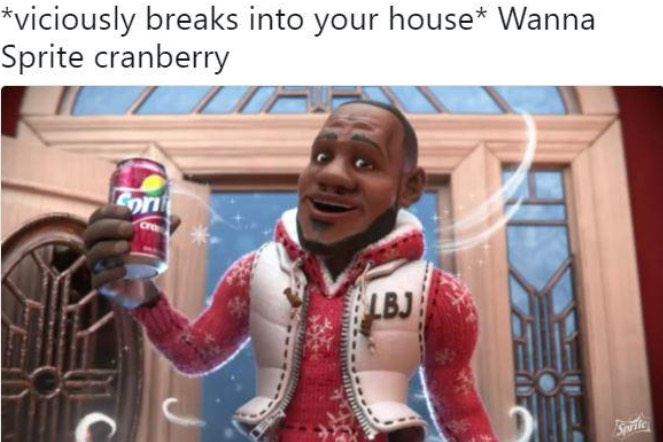 The Popeyes Chicken Sandwich, Sprite Cranberry, Slim Jim, Fruit by the Foot and other various food and beverage items all share one common thing: meme culture has elevated these products into legends.

The word meme is tough to define, but some may say it’s a funny photo with a caption posted online, often making fun of or imitating the subject in the photo or the viewer themselves. The word itself is derived from the Greek word mimema which means “something imitated.”

Some of these food items indirectly get hyped up by the fairly new meme culture, such as the Popeyes’ chicken sandwich and Sprite Winter-Spiced Cranberry, while others market their products directly toward the meme culture. Slim Jim and Fruit by the Foot have Instagram pages that could be considered a “meme page,” which is an extremely new way of marketing.

Marketing to the meme culture can be very effective, but when a product falls victim to the meme culture, it can get messy. When Popeyes’ announced the release of their chicken sandwich, the internet and meme culture went crazy. Without all of the memes, the sandwich wouldn’t have been nearly as successful. This is partly because both the Chick-Fil-A and Popeyes’ fanbases went toe-to-toe on Twitter in an all out battle, arguing that one sandwich was better than the other. The free advertising was immeasurable.

Both chains called out one another on Twitter, firing up their fans even more. Popeyes’ tweeted, “I’m gonna tell my kids this is the Original Chicken Sandwich,” which is blatantly throwing shade at its competitor, Chick-Fil-A, who claimed to have the original chicken sandwich in a previous tweet.

The re-release of the Popeyes’ sandwich was just as hectic as the original release, with a man getting stabbed to death at a Popeyes’ location because he cut the line on November 5th.

“The day that (the chicken sandwich) came back was nearly the same as the day it came out, chaotic, absolutely chaotic. There were lines around the building and the drive thru line went into the street,” he said.

People take their sandwiches seriously, but does it all really live up to the hype? I was personally influenced by all the memes I saw so I decided to try the sandwich. It turns out that it was the best chicken sandwich from a fast food restaurant I’ve ever had, but it still didn’t live up to my high expectations I had set due to all the hype.

“The sandwich was really good, but I think it was over-hyped to the point where I was expecting it to be better than it was,” said Novato High junior Alex Morais as he finished the last bite of his Popeyes’ chicken sandwich.

Popeyes isn’t the only food or beverage company that benefits from the meme culture. Sprite has had extremely good marketing for the seasonal flavor ‘Winter-Spiced Cranberry’ with famous NBA player LeBron James being the face of the product in all of the ads. With the faces of Lil Yachty, Drake and LeBron James, Sprite is notorious for having celebrities endorse their products. These ads give Sprite the initial exposure, then meme culture turned to Sprite Cranberry, and influenced millions to buy the new specialty soda.

The hype for Sprite Cranberry was real, as seen on social media. There were people posting pictures of the prized drink all over the nation (witnessed on many SnapChat stories). I got ahold of the drink the day it came out, and when I cracked open the cold can, I was disappointed. But then I took another sip, and another, and the drink got better. It got better with every sip. It’s just Sprite with a hint of cranberry, nothing more nothing less.

“I tried Sprite Cranberry and it was pretty good. It had a hint of cranberry but otherwise it was just the normal Sprite taste,” said Almog.

Other food companies use memes to enhance advertisement, such as Slim Jim and Fruit by the Foot. Both of their pages use their memes as subliminal advertising, as the viewer may not realize it’s an undercover advertisement. Slim Jim took advantage of the opportunity after they developed a solid fanbase. The extreme amount of Slim Jim followers consider themselves to be a part of the “Long Boi Gang (for life)” and Slim Jim even went as far as to make limited edition “Long Bois.”

Meme culture is just beginning to affect the food and beverage industries, and it will be interesting to see if this form of marketing will continue to grow in the future.