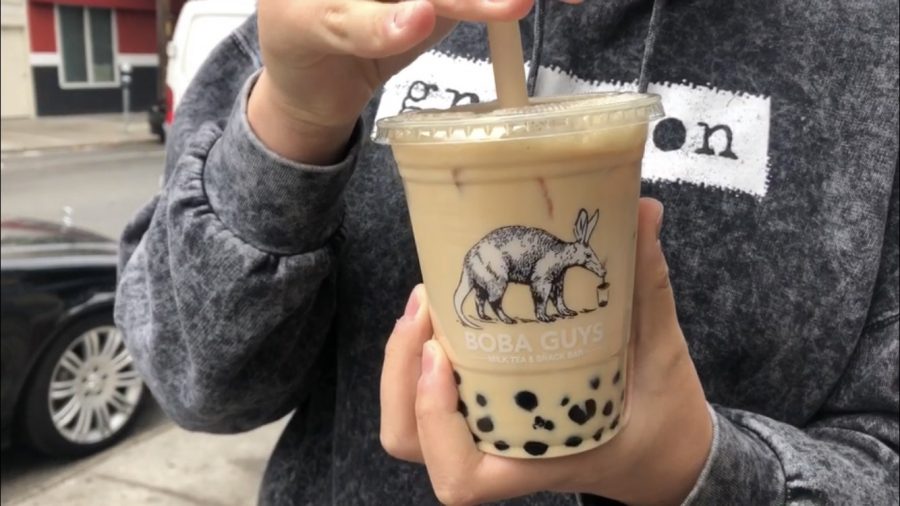 The trend of drinking boba has been present in America for over 30 years. Yet in the last 10, it has swept the nation. I sampled three different boba spots to compare and contrast their basic teas.

Boba, or bubble tea, originated in Taiwan in the 80’s and quickly spread across China and Taiwan, influencing culinary culture along the way. By the 90’s, boba had become a mainstay for Asian-American families and by the 2000’s, it had become a popular drink across America with chains such as Quickly or Sharetea popping up in big cities.

Boba itself is the name people call the tapioca balls that have been associated with the tea, and the tea is usually made with milk. There are other toppings available and a variety of flavors, but at every location, I ordered a classic black tea with 50 percent sweetness and boba. I then ranked it on a 1 to 5 scale. Personally, I prefer a less sweet boba with a chewy texture and a relatively sweet tea, which influenced my decisions with the grading.

Pearl is a newer addition to the boba scene in Novato. Opening up in 2018 right down the street from Novato High, it is an easy place to go during lunch. The downside of this convenience seems to be a lower-quality boba. They get their boba imported from an offshore location so freshness could be a factor. The boba is so sweet it’s sickening and it melts in your mouth. This is not what boba should be, it should be chewy and just a tad sweet. The boba tasted like honey and was not very good with the tea, but the tea itself was decent and next time I go there, I would get the tea alone without the boba. This was the cheapest tea I got, only costing me $4.50

I give Pearl a 3 out of 5, however the boba issues massively brought down this grade. If I were to have gotten just the tea, this grade would have been a 5 out of 5. It is very convenient for students to go to and is the only boba place in Novato, so beggars can’t be choosers.

Sharetea has become a multinational chain. Originating in Taiwan, it has spread across the world into over 50 countries, and has become dominant in boba culture. It is located in a little strip mall on Grand Avenue and is easy to miss, but it is always worth the stop when you are down in San Rafael. It has become a go-to spot for myself and my friends, proving to be the best boba in close proximity to Novato.

The tea itself is okay, but even at 50 percent sweetness, the tea completely overpowered the boba. This is the only location I went to that had the proper lid that most people associate with boba. It is a film of plastic put over the top by a machine and it is very satisfying to poke the straw through. The boba is tasty, but isn’t chewy enough for my liking. It isn’t too sweet when eaten alone. When I asked the worker where it came from, he said they imported the boba from somewhere in Taiwan but he couldn’t give me an exact location. The tea rang out at $4.75 plus tax.

I give Sharetea a 3.75 out of 5. It would be a 4 out of 5 but the overpowering sweetness of the tea knocked it down. The closeness to Novato makes this an easy stop on any trip down south.

San Francisco has become a hub for boba and new innovations with the extremely popular Boba Guys opening in 2011. They started in the Mission District with unique takes on boba, such as horchata, and have since expanded to 15 stores across three major cities. The little aardvark logo catches your eye as you walk toward it and the lines can often span down the block and around the corner. This is a sign of their absurd popularity.

The tea was very crisp and smooth and blended very well with the boba. The boba itself is made by The Boba Co., based in Hayward, which was started by Boba Guys. It is sweet but not too sweet and perfectly blends with the tea. It doesn’t melt in your mouth like other boba and is just the right consistency to chew on. The tea was not too sweet and had a very nice texture. They also have a biodegradable bamboo straw, which is good for the environment but it crumpled while I was drinking the boba. It is a little bit pricey, ringing out at $5.99 but you’re paying for the quality of the ingredients.

I still give this a perfect 5 out of 5 for the great boba and tea, as well as the vibe inside the shop. It is a must go destination.