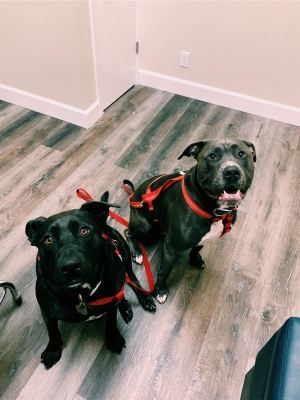 Although guard dog and fighting dog breeds, such as Rottweilers and Pit bulls, are evolving into family dogs, there is still a huge stigma surrounding these breeds, as many believe they should only continue doing what they were made to do.

This stigma’s roots derive from the countless years of conditioning and training these breeds endured, and the fact that they were essentially developed to perform specific jobs. Pit bulls, for example, have a history of being fighting dogs, which dates back more than 1,000 years through a practice called “bull-baiting.”

It’s due to these stereotypes that Breed Specific Legislation (BSL) exists and restricts individuals from keeping dogs of a specific breed.

As a result of these preconceived notions, 900 cities in America, such as Miami, have banned dangerous dog breeds through the BSL. Countries such as Denmark and Norway have gone as far as banning the breed in general.

NHS Principal Mark Brewer believes the media plays a big role on the stigma as well.

“The media and news does not portray them as a super friendly kind of breed. People are fearful of these dogs like the Doberman and German shepherd because of the messages the media displays,” said Brewer.

Although these breeds appear dangerous to many, they’re viewed just like any other dog breed within the Novato High community.

Mahoney believes it’s not the dog’s fault, but rather the owner’s.

“There’s a lot of [expletive] dog owners. A lot of the time, low-class people, of all different races, gravitate towards these dogs. I don’t know what it is about the Pit bulls or Rottweilers and those type of dogs,” said Mahoney. “When you have [expletive], low class people raising animals, you get aggressive animals. It is 100 percent on the owner.”

Brewer strongly believes that it’s not the dog’s nature that makes them aggressive, but how they were raised.

“It really depends on how the dogs were raised. Certain people raise them to be aggressive and train them that way like a guard dog for their house. That’s how they become aggressive dogs. If you don’t socialize them when you get them in a social setting with plenty of people, they’ll get defensive of their owners and themselves, because they aren’t used to all the people. You can see that with any breeds, especially with Chihuahuas,” said Brewer.

Brewer also provided an example of nature versus nurture.

“I have a friend in Napa who has two Pit bulls that he’s raised as puppies and they’re the sweetest dogs ever. They’ve never been aggressive. However, if you looked at them, you’d believe they were,” Brewer said.

Senior Leah Lyonn had the same mindset as Mahoney and Brewer.

“I don’t feel that the stigma is true at all. It depends upon each dogs’ individual training and owner. It’s true to any dog,” she said.

As an owner of both a German shepherd and a Pit bull, I am affected by this stigma on a daily basis. My routine visits to coffee shops lack the company of my dogs because fellow customers avoid our presence. My routine trips to the dog park has come to a halt due to fellow dog owners hiding their dogs from playing with mine. Even on routine walks, it’s clear that we are the reason other people walk to the other side of the street.

Much like us, all dogs are individuals, each with their own history. Dogs should not have their personalities assumed by their breed, as people should not make assumptions due to people’s past.