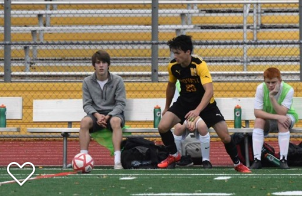 Despite a turbulent 2018-2019 season, the Novato High boys basketball team is set to embark upon a very hopeful season. Last year’s 11-15 record fell short of the Hornet’s goals, along with unfulfilled aspirations of making the playoffs. This year, the team features eight varsity returners, including four of last year’s five starters. Leading the Hornets is Coach Rob Barde, returning for his fourth season as head coach.

One of the starting returners, an all-league recipient and three-time varsity captain, Jason Carpenter, spoke about the upcoming season.

“Last year, we fell short of our goals and it left a bad taste in our mouths,” said Carpenter. “This year, we are hungrier than ever. For the longest time, the league has not really noticed us, but people will know who we are by the end of this season.”

The boys soccer team, coming off a successful season, looks to take care of unfinished business this winter. Though the team was in first place throughout last season, they struggled in postseason play. This year, the Hornets feature nine varsity returners with playoff and championship hopes.

Senior Captain Julian Albert commented on the excitement of the season ahead.

“We had a disappointing end to our season last year,” said Albert. “But, it has only fueled us to keep working. We don’t want to feel the same way we did last year, and trust me, we won’t.”

The senior-heavy Hornets will look to rebound from a difficult 2018-2019 season. Eleven varsity returners will lead the way for the Hornets, many of which have been working on their games throughout the offseason. Although now without two graduated all-leaguers, Erin Brown and Jennifer DeLeon, the team features five seniors, all in the running for all-league honors.

Senior Emma Clark, the varsity captain, discussed the season ahead.

“The future is bright for this season,̈ said Clark. ¨This is our last chance to prove ourselves and show the league what we’ve got.”

The Novato High Girls basketball team also has success in mind for this season. Not only will they be led by third-year head coach Mike Woolard, they also return key varsity players from last years roster. The Hornets will start non-league play on November 22nd against Healdsburg.

“Our goal this year is to start to do the little things right, mainly culture stuff,” said Mock. “We want to be a team that goes hard every play, and never loses effort wise.”

The Novato High Wrestling team has title aspirations. Twenty wrestlers will be competing this year, allowing the team to compete in eleven weight classes. The team will feature a few notable returners including junior Markus Obata, who will compete in his weight class.

Senior Captain Ethan Mengelberg commented on his goals for the season.

“We are shooting to win MCAL’s this season,” said Mangleberg. “Also, we would like to go to the second day of NCS, maybe even state. I think it is possible.”